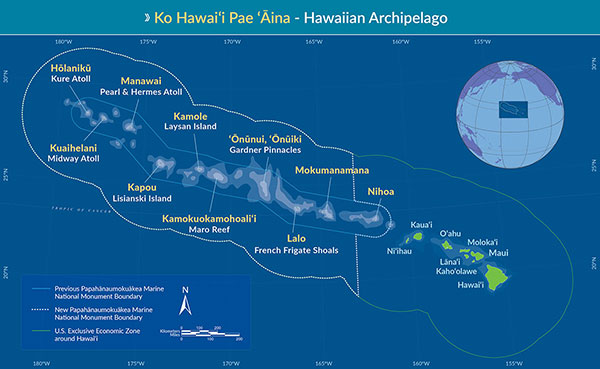 The regional council wants to allow fishing in protected waters via "customary exchange," drawing the ire of Papahanaumokuakea's Hawaiian stewards.

Wespac’s proposal explicitly prohibits commercial fishing in those waters around the remote Northwestern Hawaiian Islands. However, Case and members of the monument’s Native Hawaiian Cultural Working Group say that another part of the council’s proposal, which it describes as “customary exchange,” would allow such fishing to occur.

“This is just the latest effort … by a council plagued by ethical concerns in its continued attempts to resubject Papahanaumokuakea to commercial fishing,” Case wrote in a Jan. 3 letter to NOAA Administrator Richard Spinrad.

Customary exchange as laid out by Wespac would allow Native Hawaiians with the proper subsistence fishing permits to catch up to 350,000 pounds of certain fish a year and recoup up to $15,000 in costs per trip. Generally, those permittees could “sell, barter or trade” to recoup their costs associated with fishing in waters between 50 and 200 miles around the Northwestern Hawaiian Islands.

Such a traditional practice fits well in other Pacific regions, but at Papahanaumokuakea it would be “harmful and incompatible” because those waters traditionally were kapu, or off-limits, to most fishing, the Hawaiian CWG told Wespac in written testimony.

“Due to the deep spiritual significance and marginal nature of this remote region, people visiting exercised a higher degree of restraint to not leave a lasting impact on the land and sea,” its members advised the council.

Prior to European contact, Native Hawaiians would typically sail to the Northwestern Hawaiian Islands of Mokumanamana, or Necker, and Nihoa, about 290 miles from Honolulu, to conduct ceremonies and offer hookupu, or offerings, at those sites, said William Aila, a CWG member and its first chair. Most of the fish those voyagers caught went toward food sustenance along the way, and the purpose of the journey was not the fishing itself, he said.

Nonetheless, a majority of Wespac approved the recommendations last month, and announced in a press release that fishing had returned to the Northwestern Hawaiian Islands after 15 years. It’s all part of an evaluation over whether to eventually designate the monument as a Marine National Sanctuary. That designation would aim to “strengthen and increase the long-term protections”already in place at the monument.