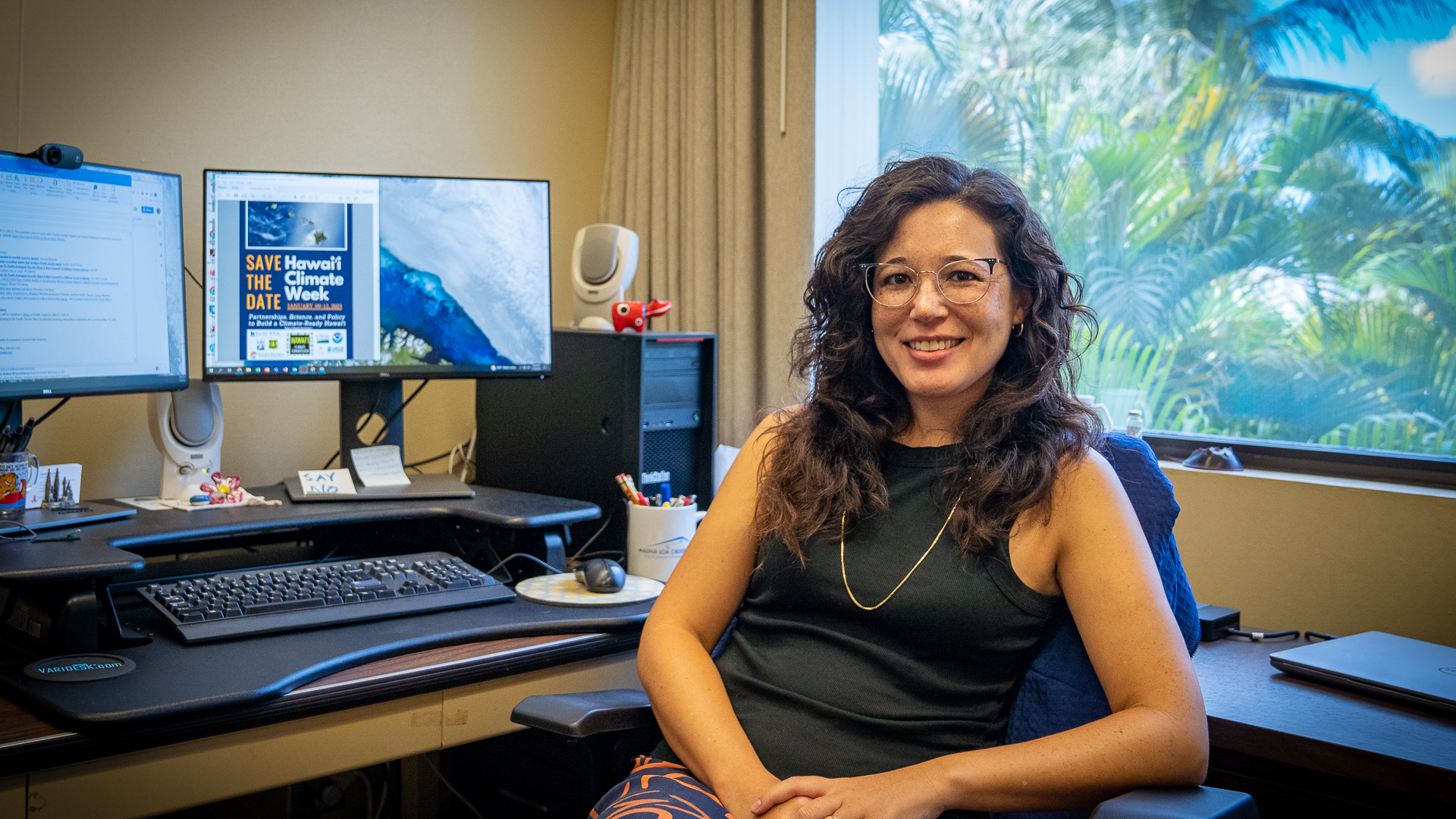 HI - Bridging The Gap: This Climate Scientist Is Seeking Solutions Outside The Lab

The East-West Center senior research fellow (and low key drummer in a metal band) is connecting people in the fight against the effects of a warming planet.

When Victoria Keener was starting her environmental career about a decade ago, one of her mentors told her that scientists are either innovators or connectors. The innovators are the ones on the cutting edge, advancing their fields, while connectors are the ones who can bring people together across different silos.

Like many others, she wanted to be an innovator. As her career advanced, however, she realized there is innovative work to be done as a connector — and that solutions in the fight against climate change rely on building those bridges between otherwise segmented sciences and industries.

That’s a critical part of her job now as a senior research fellow at the East-West Center in Manoa, where she co-leads the Pacific Regional Integrated Sciences and Assessments program.

As a principal investigator, she works with a team of seven social and physical scientists researching ways to apply climate science and data to decision-making in the Pacific region. They provide information to policymakers at local and state levels when elected leaders have to make big decisions addressing climate adaptation and mitigation, for instance.

What are the effects of climate change? How they disrupt our daily life, fuel disasters. USA TODAY / December 15, 2022

In her role, she connects politicians, natural resource managers and community organizations to scientists and academics – all in an effort to initiate climate solutions. The Pacific RISA team comes with a diverse background in the sciences as well, enabling them to approach climate change more holistically.

In fact, Keener finds that gaps in knowledge between differing fields are where there can be the most growth.

“The sticking points in being able to make changes, especially when addressing big problems like climate, are that we have siloed ourselves into these situations where we’re not sharing information and collaborating,” Keener said.

She co-authored the Hawaii and Pacific Islands section of the Fourth National Climate Assessment, an authoritative report on the impacts of climate in the U.S., and has been a member of the Honolulu Climate Change Commission since 2018.

When she’s not leading her team on projects, Keener can be found hiking, snorkeling or free diving. To blow off steam, she is also a drummer in a sludge metal band. And even though she bikes everywhere to cut down on her own carbon emissions, you’d be remiss to think she’s writing songs about coastal erosion or drought.

“I can’t think about climate change outside of work because if I did, it would totally overwhelm me,” Keener said.

Growing up in the Washington, D.C., area, Keener was always interested in how things worked. She’s wanted to be a scientist for as long as she could remember and spent a lot of time hiking and fishing with her dad. Fascinated by nature, she played with insects and even raised praying mantises, something she still does for fun today. In another life, she says she would’ve been a naturalist like one of her heroes, E.O. Wilson.

As the world’s lead expert on ants, Wilson’s work enchanted Keener at a young age so much that when she saw him give the keynote speech at the IUCN Conservation Conference in 2016 in Honolulu, she teared up.

“He was someone that really impacted how I see the world and the importance and joy of life,” Keener said.

She originally started her undergraduate career in biomedical engineering but working with live mice examining disease made her want to switch fields. Instead, she became engrossed by the way natural resources work together to service people and ecosystems. After getting her doctorate in hydrology and climatology at the University of Florida in 2010, her interests in climate change grew along with her desire to work within an interdisciplinary team to address it.