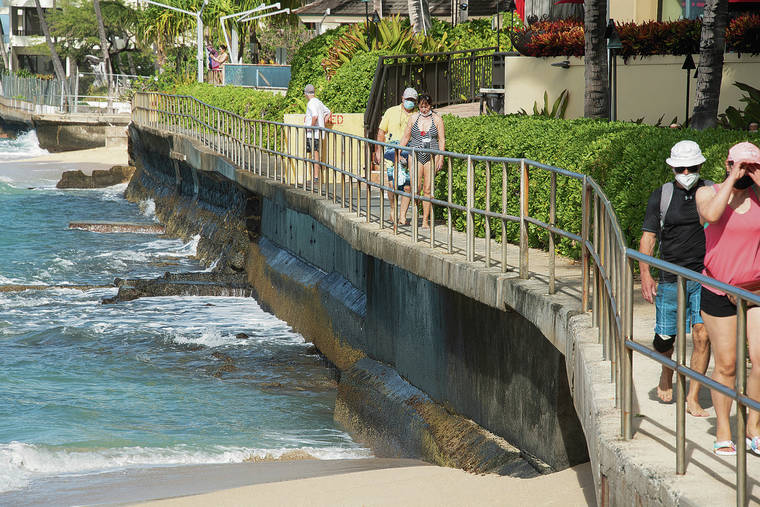 Waikiki, its shoreline eroded by seawalls and battered by rising seas, sits on the brink of more upheaval that could either destroy its few surviving natural features or protect its disappearing beach for decades, depending on one’s viewpoint.

A draft environmental impact statement is being prepared for a $12 million Waikiki Beach Improvement and Maintenance Program, proposed by the state Department of Land and Natural Resources in partnership with the Waikiki Beach Special Improvement District Association, that envisions constructing structures makai of the waterline, dredging sand and placing it on the shore; the entire program area extends from the Kapahulu Groin to the Ewa end of Fort DeRussy Beach.

One hotly debated section of the plan is to build three 200-foot-long T-head groins and a 3.8-acre beach out from the seawall fronting the Sheraton Waikiki and Halekulani resorts to help protect against coastal erosion and sea level rise and preserve tourism revenues, which would shrink by $2.2 billion a year if Waikiki Beach were to disappear, according to the state’s environmental impact statement public notice.

Critics of the proposal expressed concerns that nearshore reef habitat for the endangered Hawaiian green sea turtle would be covered by the rock-rubble groins and the sand; that the groins would alter surf breaks and endanger swimmers; and that the plan does not protect the public’s right under the Hawaii Constitution to access and laterally traverse the shoreline.

For nearly a century the public has traversed the storied Halekulani waterfront on a sidewalk atop the seawall, but now a 75-foot-long section of the path has been closed for more than three years.