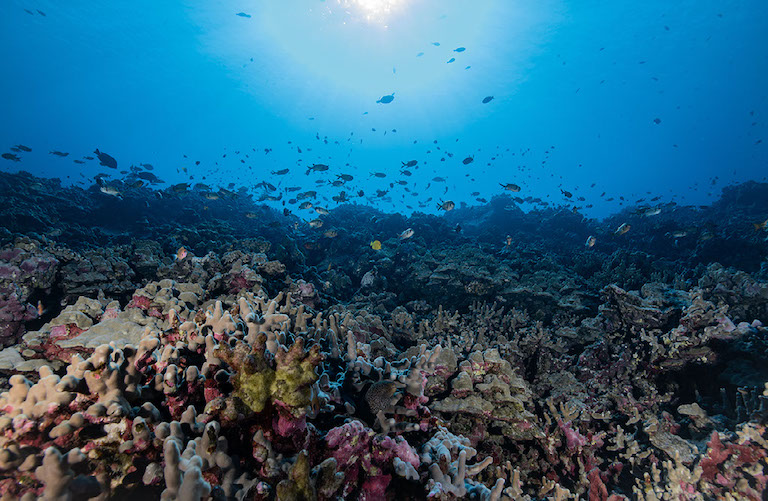 A team of researchers used an airborne mapping technique to survey living coral distribution across the main Hawaiian archipelago.

In a newly released map, the coastal waters of the eight main Hawaiian islands are alight with color. Blue, turquoise, green, yellow, orange and red tinge the islands’ perimeters, each hue representing a different level of live coral cover. Blue means that the surrounding reefs contain less than 10% live coral, while at the other side of the spectrum, red corresponds to 90% live coral.

A team of researchers developed this map to provide an overview of living coral distribution around the main Hawaiian islands. Like many coral reef systems around the world, Hawaiʻi’s reefs, which cover 166,000 hectares (410,000 acres) across the archipelago, have been subjected to a profusion of anthropogenic pressures, including coastal development, pollution, fishing activities, and climate change events like marine heat waves. Using 3D imaging techniques conducted from the air, the research team scanned the reefs at a water depth of 16 meters (52.5 feet), and identified places where coral cover was either dense or sparse. A study on this mapping technique was published last month in Proceedings of the National Academy of Sciences of the United States of America (PNAS).

“This is the first time that anywhere on the planet, we’ve been able to map the live coral distribution across an entire archipelago, and at a scale that shows us the relative quality of different reefs over a really large area,” Greg Asner, the study’s lead author and director of Arizona State University’s (ASU) Center for Global Discovery and Conservation Science (GDCS), told Mongabay. “And then that’s the critical step needed to generate new innovations in conservation and management.”