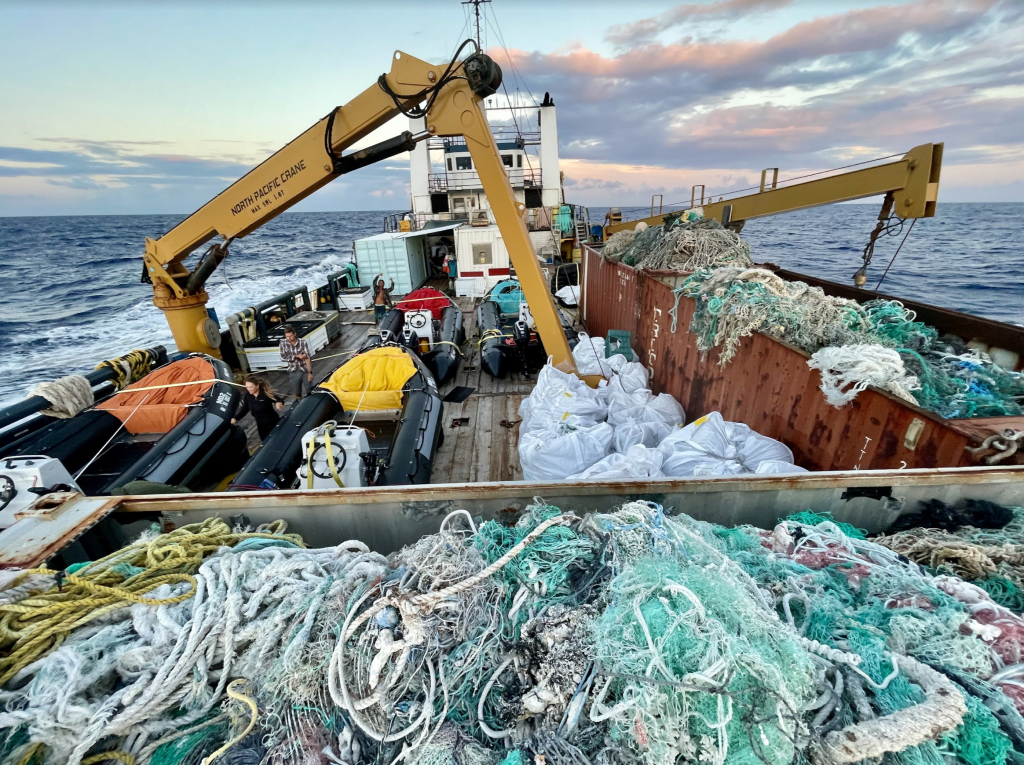 More than 97,000 pounds of marine debris was removed from reefs and beaches of Papahānaumokuākea Marine National Monument (Northwestern Hawaiian Islands), including 86,000 pounds of ghost nets cleaned from a single reef.

A team from the Papahānaumokuākea Marine Debris Project, a Hawaiʻi-based nonprofit organization, returned the debris to Honolulu on Saturday aboard the 185-ft ship M/V Imua.

The reef, known as Kamokuokamohoaliʻi (translation: “island of the shark god”) or Maro Reef, lies in the heart of Papahānaumokuākea Marine National Monument, a string of remote and uninhabited islands that make up the last 1,300 miles of the Hawaiian island chain.

Kamokuokamohoaliʻi itself is an open-ocean coral reef with no emergent dry land.  The shallow (<10 ft depth) portion of the reef that accumulates marine debris is roughly 8 miles in length, with narrow spiderwebs of coral reefs criss-crossing a wide central lagoon.

These shallow coral gardens support a vibrant ecosystem teeming with life: endangered Hawaiian monk seals, honu (green sea turtles), rays, sharks, and thousands of reef fish, many of them found only in Hawaiʻi. Kamokukamohoaliʻi is one of the most diverse coral reefs in all of Hawaiʻi, harboring 37 coral species, according to NOAA.

Ghost nets, which are large tangled masses of lost or discarded fishing nets made of plastic, routinely snag on the shallow coral reefs of the Hawaiian islands, smothering and breaking the living coral colonies.

One single trawl net the team discovered at Kamokuokamohoaliʻi was found plastered across nearly 200 feet of reef by the ocean currents and had smothered much of the living coral underneath it. These nets also pose a major entanglement hazard for most marine wildlife, most notably the endangered Hawaiian monk seal, of which only 1,500 remain. Hawaiian green sea turtles (honu) and many species of seabirds are also vulnerable to this threat.

The team of 16 freedivers from PMDP set off from Honolulu on July 2 on a 27-day cleanup expedition to Papahānaumokuākea Marine National Monument.  Over 12 intensive days of work at Kamokuokamohoaliʻi, the team surveyed 1,100 acres of coral reef and successfully removed 86,000 pounds of ghost nets from that area.