Hawaii & Alaska
A wave laps the side of Honoapiilani Highway in Olowalu during high tide on July 14. A recent study on the vulnerability of Maui County beach parks showed that more than 80 percent of parks surveyed have a low resiliency to sea level rise impacts. The Maui News / MATTHEW THAYER photo 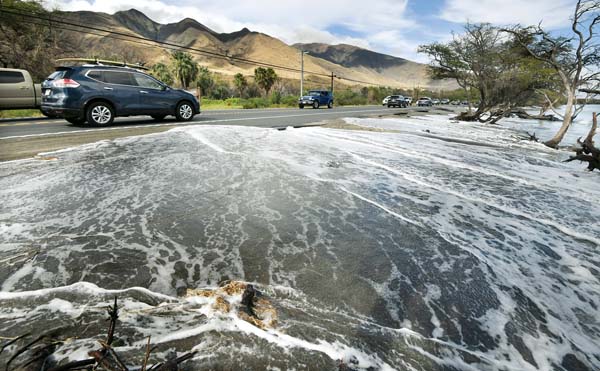 A recent study on the vulnerability of Maui County beach parks showed that more than 80 percent of parks surveyed have a low resiliency to sea level rise impacts.

Mitigative action by the Department of Parks and Recreation needs to start now, even though some coastal threats, such as chronic flooding and erosion, may not occur until 30 years or more in the future, the Maui County Beach Parks Vulnerability and Adaptation Study said.

The Maui County Department of Parks and Recreation launched a project in 2020 to assess the vulnerability of its beach parks caused by sea-level rise and other coastal threats, as well as potential adaptive strategies for each park.

The goal of the study was to assess the vulnerability of parks to coastal hazards and sea level rise; determine the potential for each beach park to adapt to future conditions; identify adaptation strategies for each beach park; develop a prioritization framework for investments in park infrastructure; as well as recommend policies, strategies and actions to address the short- and long-term impacts of climate change.

Sixty-five of the 240 beach parks in the county, as well as the Waiehu Golf Course, were included in the study, and all are expected to experience long-term shoreline change, according to the study.

“The mapping tool is very informative for our residents as well as Department of Parks and Recreation staff,” said Maui County Mayor Michael Victorino in a news release Friday. “With climate change, we can’t begin too soon to plan for sea-level rise near Maui County’s nearshore assets.”

The study was funded by the County Council and was conducted with planning and technical assistance by Tetra Tech Inc.

Some coastal threats already evident at beaches include chronic flooding, event-based flooding and erosion, worsening due to rising sea levels and other coastal hazards exacerbated by land use and other human activities.

Among the 240 county facilities, which include restrooms and parking lots, 78 are expected to be exposed to sea level rise within the next 30 years or earlier if “high tide and wave events and storm surge impact the shoreline as has occurred at Baldwin Park,” according to the report.