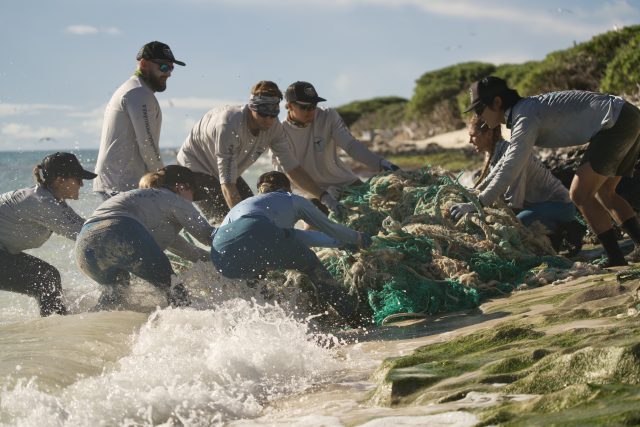 HI - 106000 Pounds Of Marine Debris Cleaned Up In Papahanaumokuakea

It was the second large-scale clean-up effort inside the national monument around the Northwestern Hawaiian Islands.

The 583,000-square-mile area around the Northwestern Hawaiian Islands is the second largest wildlife refuge in the world, and contains 3.5 million acres of coral reefs. As one of the last wild places, it’s home to a plethora of seabirds, fish, endangered plants and animals that is off-limits to most humans, with the exception of a handful of volunteers, scientists and others.

The team collected over 96,000 pounds of ghost nets and over 9,000 pounds of ocean plastic debris from the reefs and shorelines of Kapou (Lisianski Island), Manawai (Pearl and Hermes Atoll), Kuaihelani (Midway Atoll) and Holaniku (Kure Atoll).

During their last large-scale clean up in July, they focused on Kamokuokamohoalii, Kamole and Kapou reefs and collected about 100,000 pounds of marine debris, bringing their cumulative total of debris removed to 202,950 pounds this year, and overall total to half a million pounds since they began large-scale cleanups two years ago.

Out of the 30 days Kevin O’Brien, PMDP founder and president, and his team spent living aboard the 185-foot Imua in the remote part of the Hawaiian archipelago, he said one of the most memorable days they had was when the team found two turtles tangled up in a ghost net that they were able to set free.

“It just makes me think every time I see something like this, the number of these incidents that we don’t see, has got to be like 100 or 1,000 times more than what we actually see,” he said. “It’s a sobering realization.”

The PMDP team trained vigorously for two months before their first large-scale clean-up in July, O’Brien said. All 16 members, the youngest of whom turned 20 during their trip, underwent a combination of in-house drills, an international free-dive safety course, and eight days of scientific motor boat operator training.

An estimated 114,000 pounds of marine debris accumulates on the reefs in Papahanaumokuakea each year, despite the fact that no one is allowed within its 200-mile border without a permit. This was the first year of PMDP’s five-year strategic plan to tackle the problem.

“Every time we get out there it’s an adventure,” O’Brien said.