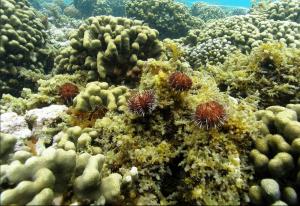 The first hatchery-raised sea urchins outplanted in Kāneʻohe Bay are 10-years-old, and the University of Hawaiʻi at Mānoa Pacific Cooperative Studies Unit (PCSU) and the State of Hawaiʻi Division of Aquatic Resources (DAR) are celebrating the milestone anniversary.

The sea urchin hatchery, funded by the National Oceanic and Atmospheric Administration (NOAA) and DAR, successfully transplanted the first cohort in January 2011 and has since released 600,000 sea urchins across the state.

These sea urchins have proven to be incredibly successful at controlling invasive seaweed, a major priority for coral conservation in Hawaiʻi. To date, the sea urchin biocontrol project has treated more than 227 acres of reef in Kāneʻohe Bay, and has recently expanded to the Waikīkī Marine Life Conservation District to control invasive algae.

Urchins (Tripneustes gratilla) are spawned, settled and raised at the State of Hawaiʻi’s Ānuenue Fisheries Research Center at Sand Island as part of a multi-agency effort, involving PCSU, DAR, NOAA, U.S. Fish and Wildlife Service and the State of Hawaiʻi Department of Transportation. The sea urchin hatchery—retrofitted from an old shrimp aquaculture facility—is a 24/7 operation managed by David Cohen and his staff, who raise sea urchins until their juvenile life stage. It takes approximately four to five months until urchins are large enough to be transferred to Kāneʻohe Bay.