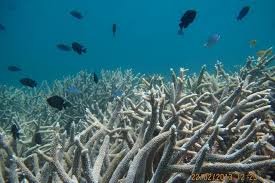 Coral reefs that are turning white due to rising sea temperatures, caused by climate change, could be saved by cultivating more heat resistant algae, researchers claim.

Australian researchers removed algae from reefs and exposed them to 88 degree Fahrenheit waters over four years until they developed a greater heat resistance.

They were exposed to similar temperatures as those that caused a mass bleaching of the Great Barrier Reef in 2016 and 2017 – about 5.4F to 7.2F warmer than usual.

The team from the University of Melbourne then put the new algae into coral and found they were able to share their heat resistant properties with the coral.

The colourful appearance of a reef is caused by the algae that lives in the tissue of the coral – when the water is too hot that algae is expelled, causing a bleaching.

Researchers discovered that coral with increased heat tolerance have the potential to reduce the impact of reef bleaching caused by marine heatwaves.