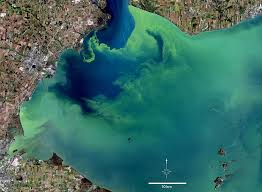 Algae might be small, but when they grow out of control, forming harmful algal blooms (HABs), they can cause big problems. Detecting HABs can present a challenge due to the complexity of the coastal environment. Now, scientists have developed a way to detect HABs early on by using images of Earth from space.

Images from the Hyperspectral Imager for the Coastal Ocean (HICO), a remote sensing instrument that operated from 2009 to 2014 from the International Space Station, were used to develop an algorithm that monitors algae by detecting chlorophyll fluorescence. Since the space station covers about 80% of Earth’s surface, including most coastal regions where HABs are a major threat, it helped to provide the ideal data for developing a new algae bloom detection system.