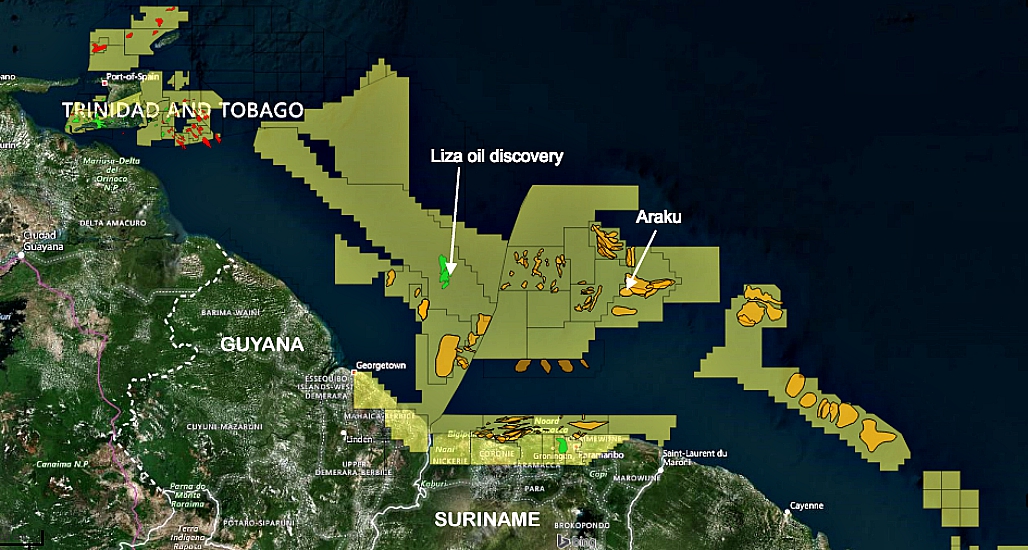 GY - The Most Exciting Oil Frontier On Earth

After two years of regular oil discoveries in Guyana, it seems its deep waters may hold even more crude, adding to its reputation as the next big oil-producing state. But the government will have to get its agreements in order if it wants to ensure the future financial security of the country, as major international players swoop in to reap the rewards.

Guyana is home to the largest oil discovery in the last two decades, after Exxon Corp made several more finds in the offshore Stabroek block last year, bringing their total find to 11 billion barrels of oil. And now Exxon has expanded its exploration zone below the previous 15,000 feet depth to drill at 18,000 feet.

Thanks to so many successful consecutive discoveries, Exxon hopes its third platform will be up and running months ahead of schedule, in Q3 2023 rather than in 2024. The deeper exploration is expected to expose billions more barrels of oil reserves, according to John Hess, CEO of Hess, which has a 30 percent stake in the Exxon-led consortium in Guyana. Hess suggested that the Fangtooth discovery well, which was drilled at 18,000 feet earlier in the year, could become a new production unit of its own due to its size.

Guyana's Vice President Bharrat Jagdeo expressed the government’s eagerness to develop its offshore reserves further, with no plans to conduct more seismic studies on blocks scheduled to be auctioned in September. At the end of May, he stated, “The price of oil is high, and I think now is the right time if we go to the auction, so we are angling towards going -- using the current data set -- not generating future data sets.”

The auction will include Block C, an ultra-deep-water zone that has not been licensed for exploration before. Although, it is uncertain whether the entirety of the 9,500 km2 area will be auctioned as one block or whether it will be split up. It is also uncertain whether Exxon will take part in the auction or if Guyana will favor new players in the market.

Even before the recent deep-water discoveries, there was great optimism around Guyana’s potential, with the expectation of it becoming a leading world oil producer. Exxon made five discoveries between January and April this year, bringing the total to 31 finds at that point. Its huge reserves are now greater than those of top South American producers Colombia, Ecuador, and Argentina. Guyana is now the seventh-largest oil producer in Latin America and the Caribbean and is expected to become a leading top-20 oil-producing nation globally with an estimated output of 1.2 million bpd of crude from its Stabroek block by 2027.

Despite the huge finds, Guyana is in no rush to establish a new production sharing agreement (PSA) for its offshore sector according to the Natural Resources Ministry. A new PSA would revisit the existing government agreement with Exxon and partners for the Stabroek block, to raise the country’s royalties for future oil and gas projects. The current PSA has been widely criticized for being too favorable to oil producers.

Guyana is, instead, expected to focus on the establishment of an oil and gas regulatory body, which will support the creation of a new PSA and other industry matters. But with upcoming auctions for greater exploration across the region, Guyana may be missing out if it waits too long to establish the new regulator and PSA.

Industry experts and environmentalists worry that Exxon and other international players may take advantage of the small South American country if the government doesn’t act quickly and decisively. While environmentalists worry about the new fossil fuel production operations, many acknowledge the significant opportunity being presented to Guyana to develop its economy. As one of the poorest countries in the Caribbean, Guyana can use revenues from the oil industry for economic and social development. In addition, as major oil and gas firms move away from several existing oil operations in favor of new oil regions, there is significant potential for the development of low-carbon operations.