Gulf of Mexico
This satellite photo provided by the National Oceanic and Atmospheric Administration shows Tropical Storm Sally, Sunday, Sept. 13, 2020, at 2050 GMT. Sally churned northward on Sunday, poised to turn into a hurricane and send a life-threatening storm surge along the northern Gulf of Mexico. via The Associated Press 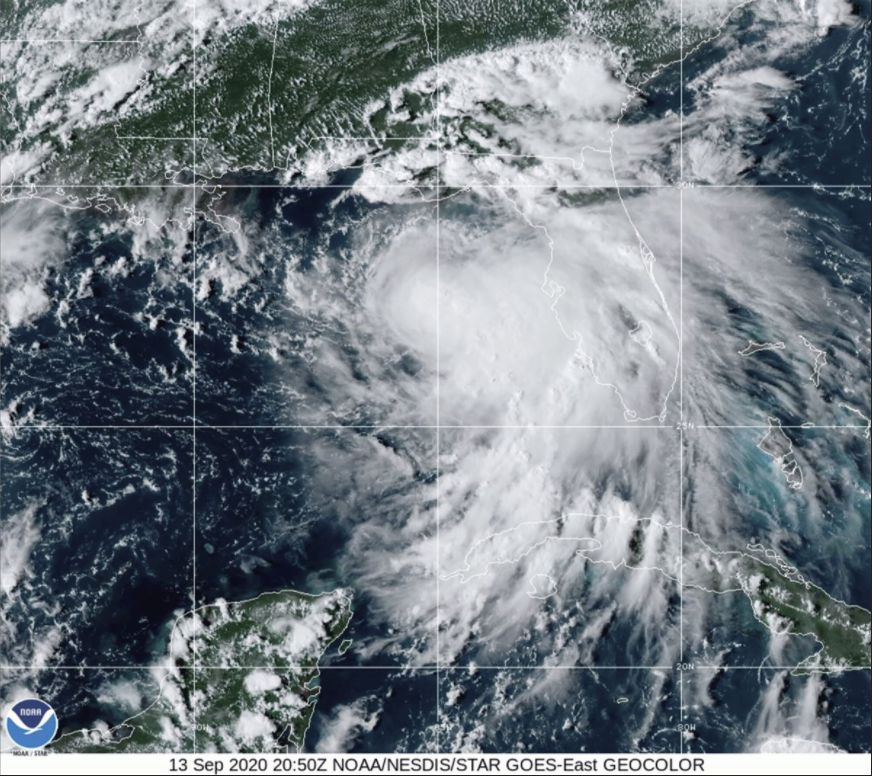 Gulf of Mexico - Plodding and Powerful, Hurricane Sally Moves in on Gulf Coast

GULFPORT, Miss. — Hurricane Sally, a plodding storm with winds of 85 mph, crept toward the northern Gulf Coast on Tuesday as forecasters warned of potentially deadly storm surges and flash floods with the heaviest downpours dumping nearly 2 feet of rain.

Forecasters said the storm’s drifting pace made it difficult to predict precisely where the storm’s eye would make landfall. But they kept nudging the predicted track eastward, easing fears in New Orleans, which was once in Sally’s crosshairs.

By late morning Tuesday, hurricane warnings stretched from east of Bay St. Louis, Mississippi, to Navarre, Florida, and forecasters said Sally should reach land near the Alabama-Mississippi state line by late Tuesday or early Wednesday. Rainfall of up to 20 inches was forecast near the coast, with a chance the storm could also spawn tornadoes.

Stacy Stewart, a senior specialist with the National Hurricane Center, said Tuesday that people should continue to take the storm seriously since “devastating” rainfall is expected in large areas. People could drown in the flooding, he said.

“This is going to be historic flooding along with the historic rainfall,” Stewart said. “If people live near rivers, small streams and creeks, they need to evacuate and go somewhere else.”

Along the I-10 highway that runs parallel to the Gulf Coast from Louisiana to Florida, rain was starting to intensify in places like Gautier and Pascagoula, Mississippi. Businesses along highway exits appeared to be largely closed. Pascagoula police tweeted video of rising seawater flowing across a coastal roadway.

In Gulfport, Mississippi, white plastic bags hung over some gas station pumps to signal they were out of fuel. Along a bayou that extended inland from the Gulf, three shrimp boats were tied up as shrimpers and others tried to protect their boats from waves and storm surge. Most boat slips at Gulfport’s marina were empty, and many businesses had metal storm shutters or plywood covering the windows.

In Alabama, officials closed the causeway to Dauphin Island and the commuter tunnel that runs beneath the Mobile River. An online video from Dauphin Island showed a few cars and SUVs stuck in a beachfront area, their tires sunk deep into wet sand.