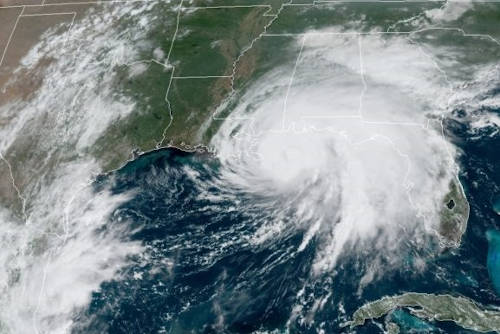 Catastrophe risk modelling firm AIR Worldwide (AIR) has estimated that the insured cost of onshore property damages resulting from Hurricane Sally will be between $1 billion and $3 billion.

Losses were caused by wind, storm and inland flood, with wind representing the majority of the onshore loss.

Although Sally included a major flood component, this peril remains underinsured in the worst-hit states of Alabama and Florida, and it’s believed that the majority of losses will fall to the NFIP.

Sally made landfall near Gulf Shores, Alabama, just west of the Florida border, on September 16th as a Category 2 hurricane with maximum sustained winds of 105 mph (165 km/h) and a minimum central pressure of 965 mb.

The storm quickly diminished after landfall as it crept northeast at around 3 mph, bringing wind gusts over 100 mph, storm surge of around 6-7 feet, and rainfall of up to 30 inches.

According to AIR, although wind speeds diminished rapidly after landfall, Sally buffeted cities and towns for hours as it moved north-northeast across Alabama at speeds as slow as 2 mph.

Coastal areas between Mobile, Alabama, and Pensacola, Florida, lingered in the northern eyewall for hours and tropical storm-force winds battered southern Alabama and the western Florida Panhandle all through the afternoon of the 16th.