Gulf of Mexico
Commercial fisherman James Bois stands astride his hand-built fishing boat at the docks of Cortez, Florida, on Aug. 20, 2020. Commercial fishermen have to be not just adept at finding and catching fish, but also managing their money from a range of activities that, for Mr. Bois, includes everything from fishing for bait to work trips to Alaska for summer salmon. As for offshore fish farms, Mr. Bois says, "100 percent, we will be affected." Patrik Jonsson / The Christian Science Monitor 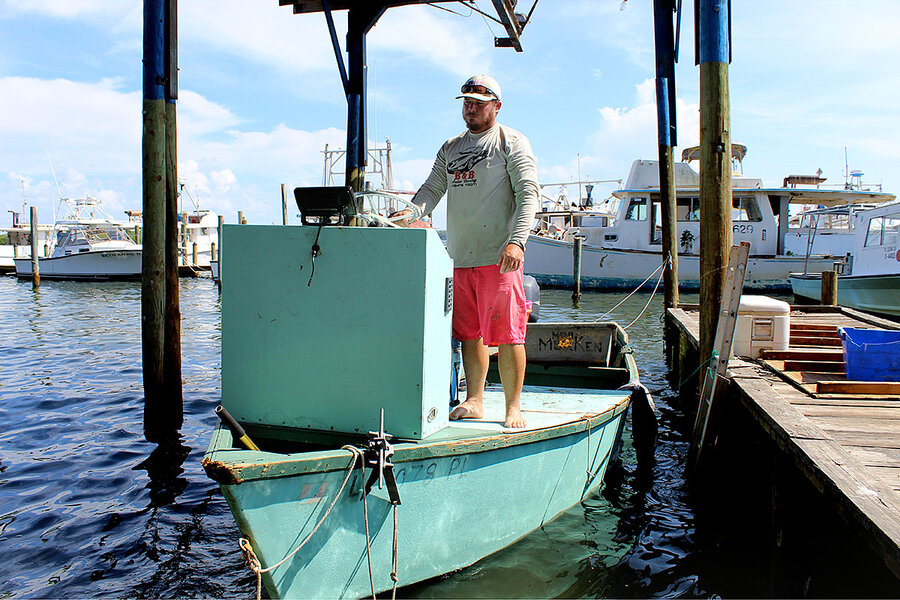 When it comes to balancing food security with protecting ecosystems, there’s no such thing as a free lunch. An ambitious project off Florida’s coast could bring down the price.

The long, choppy quest to open up the Gulf of Mexico to large-scale fish farming began, in a way, some 30 years ago on the black pearl diving docks of Micronesia. That’s where the Australian businessman Neil Anthony Sims first met the American marine biologist Kevan Main.

Their paths diverged – his to Hawaii to develop deep-water fish farming, hers to Florida to head the Mote Marine Laboratory & Aquarium in Sarasota – but the two remain key figures for a project that could transform not just the American dinner table, but also the economies of fishing ports from Alaska to Florida.

Velella Epsilon – the first fish farm in federal waters off the contiguous United States – would operate in the Gulf of Mexico, about 40 miles from Florida’s coast. Globe-shaped pens would hold fingerling almaco jack, a member of the amberjack genus, that would grow into 4-pound market fish within a year. If scaled with corporate investment, the project could eventually yield 64 million pounds of sushi-quality meat a year, enough to dramatically reshape the world’s seafood trade.

“People paying attention to the global impacts of humankind on the planet are saying we need more aquaculture, and offshore fish farms are a really scaleable, sustainable, low-impact form of aquaculture,” says Mr. Sims, the co-founder and CEO of Ocean Era, the company behind the Velella Epsilon project, in a phone call from Hawaii. “There’s deep water. You are further from shore. The currents are better. You work within the assimilative capacities of the system.”

As Velella Epsilon gains steam even under heavy regulatory headwinds, that phrase – “assimilative capacities,” the ability for the natural environment to safely absorb pollutants – will be key in a broader gambit for U.S. protein independence. At stake is whether markets and permits are enough to tackle the larger ethical questions about how to integrate fish farming into the complexities of a system that includes not just the Gulf of Mexico, but Americans who make a living off it.

“How much of the landscape and the seascape should human beings be using?” asks Philip Cafaro, a philosophy professor at Colorado State University in Fort Collins. “You have to be explicit about what your goals are. If it’s to maximize profits in the fishing industry, that’s one thing. If your goal is to maximize output to the fishing industry in order to protect communities, that’s a very different one.”