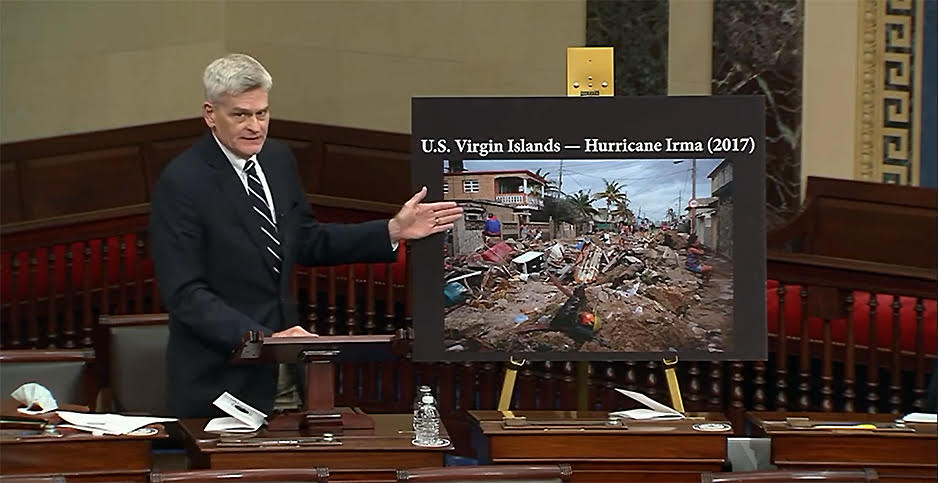 Gulf - Coastal lawmakers lick their wounds, prepare for next fight

The prevailing narrative behind the Senate's passage of the "Great American Outdoors Act" last week was a feel-good tale of bipartisan unity in the interest of advancing the most expansive conservation legislation in decades. But debate on the sweeping public lands bill was also marked by a strong undercurrent of anger and resentment from some lawmakers in both parties who felt their urgent calls for coastal restoration resources were being ignored.

Sens. Bill Cassidy (R-La.) and Sheldon Whitehouse (D-R.I.) were thwarted in their efforts to amend the lands package to help certain states collect more revenue to address their eroding coastlines caused by rising sea levels, which could further devastate homes and livelihoods along the coasts if nothing is done soon.

Why do people care more about parks than they do about people? -Sen. Bill Cassidy (R-La.)

In protest against being shut out of the process, Cassidy ended up voting against the bill that would provide $900 million annually to the Land and Water Conservation Fund plus make a down payment toward addressing a $20 billion backlog in deferred maintenance projects on public lands.

"This bill ignores the needs of coastal states in favor of fixing broken toilets and leaking roofs," he said in one of several angry floor speeches, "because I can show you the environmental needs of coastal states, not in terms of grizzly bears and pine trees and majestic mountains but in terms of people being flooded out of their homes because of a lack of investments in coastal resiliency."

Cassidy asked, "Why do people care more about parks than they do about people? That just disturbs me."

Whitehouse ultimately voted for the bill, but not without first delivering a withering floor speech where he said he would do so with a "heavy and frustrated heart" and accused his own Democratic colleagues of patronizing him and making empty promises.

"My environmental friends say, 'You're right, Sheldon, just help us with this and we'll help you with coasts.' And then you don't," said Whitehouse.

"I don't begrudge our landlocked colleagues their funding," he said. "I do begrudge them refusing me the opportunity to do something for our coasts."

As the measure now heads to the House, Cassidy and Whitehouse are faced with the question of where to take this fight next (see related story).

Like so many environmental issues on Capitol Hill, a solution to this crisis is mired in politics and partisanship.

Cassidy's proposal for getting coastal restoration funding is to lift the cap on how much revenue Gulf Coast states can receive from offshore oil and gas drilling.

But some critics fear this funding mechanism would incentivize more states to embrace a practice that carries environmental risks.

Whitehouse's proposal would allow his home of Rhode Island and other states within a certain distance of offshore wind projects to collect some of that revenue to put toward their own coastal resiliency efforts.

However, wind energy opponents could scoff at legislation promoting a technology they argue is too costly for its intermittent effectiveness.

Cassidy and Whitehouse combined their two frameworks into a single amendment in hopes that both their ideas would be taken into account while debating the "Great American Outdoors Act."

It's a strong sign of the unlikely bipartisan coalition that has formed between the conservative Republican and liberal Democrat to protect all coasts at all costs.

Whitehouse traveled to Louisiana last year to see the state's coastal erosion for himself, which began the cooperative effort Cassidy recently described as "strange bedfellows."