Great Lakes
As can be seen in this photo taken Aug. 21, 2020, the lakefront property of Minnesota couple Mike Briggs and his wife Kathy has eroded away on a Lake Superior bluff just outside of Port Wing. Danielle Kaeding / WPR 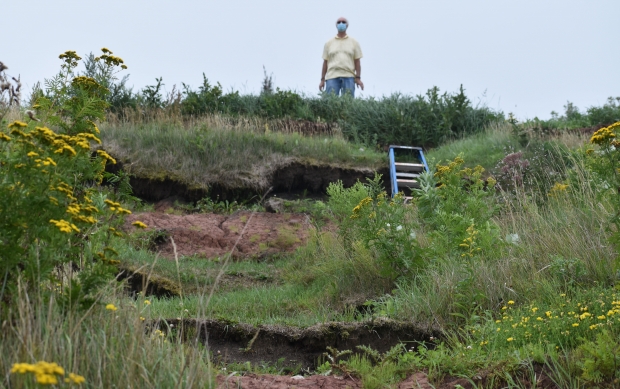 Winds stir up murky waves against the shoreline and clay bluff at the edge of Mike and Kathy Briggs' lakefront property on the south shore of Lake Superior. The couple from Cannon Falls, Minnesota, fell in love with the place the moment they laid eyes on it more than 20 years ago. They bought a cabin just outside of Port Wing, and the couple thought it was a dream come true.

"We thought we'd have it forever," said Mike Briggs.

They never imagined that they would watch pieces of their property literally slip away.

The Briggs watched as a couple pine trees where they used to hang Christmas lights started to slump down the bluff as high lake levels and storms battered the hillside. They estimate they've lost around 75 feet of their lawn each year for the last five years.

They debated whether to remodel their home and install rocks to protect the shoreline, knowing it would be expensive. As the lake edged too close for comfort, the couple began building a new home further back on the property in 2018. Last fall, they sold the cabin and their garage for $1 each to another couple who had them moved down the road.

"We got it done in September, and it's a good thing because it would have been going in the lake this spring," he said.

Mike and Kathy Briggs are not alone. Record-setting water levels on the Great Lakes have caused erosion and flooding that's cost shoreline communities an estimated $500 million in damage. Many lakefront landowners and local governments are now examining ways to make their properties more resilient.‍

On Lake Michigan, water levels are just shy of the record high set back in October 1986, prompting a flurry of activity along the shoreline. The agency has already received double the requests that were filed last year for installing emergency erosion controls like rock or concrete along the lake. As of the end of August, the agency had received 280 self-certification forms for installing material along the lake compared to 134 in 2019.