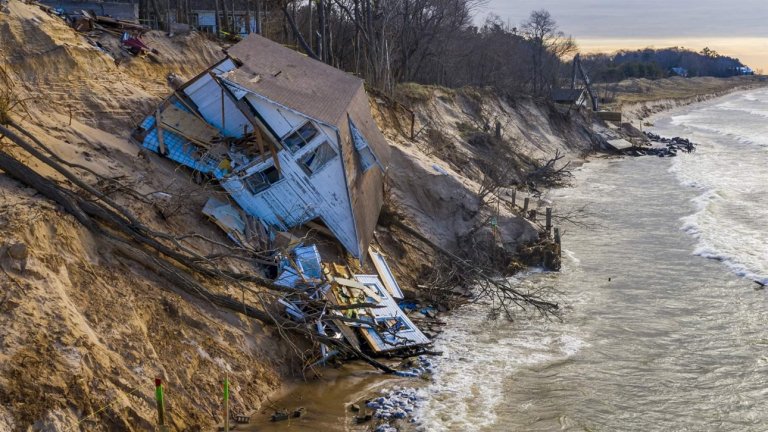 Along a shoreline that stretches farther than the combined length of the Atlantic and Pacific coasts, waters driven by climate change have risen as much as 6 feet in less than a decade, washing away houses, destroying roads and threatening critical infrastructure such as water treatment plants in towns large and small.

The ongoing disaster striking the coastal communities of the Great Lakes hasn’t captured national attention like hurricanes and wildfires in other parts of the country. But from Duluth to Chicago to Cleveland to Buffalo, leaders are reeling from untold billions in damage — and the prospect that climate change will make things worse in the years to come.

In the eight Great Lakes states, officials at every level along 4,500 miles of coastline are scrambling to save what they can from the rising water, competing for scarce state and federal dollars and rubber-stamping permits to build private seawalls at an unprecedented pace.

Scientists say the only long-term solution, as climate change causes erosion and higher highs — and lower lows — in lake levels, is to retreat from the shoreline. But few in the region are willing to have that conversation.

“People are always looking for a technical fix so they don’t have to change the way they’re behaving,” said Paul Roebber, an atmospheric science researcher at the University of Wisconsin at Milwaukee.

There are no easy answers. Communities don’t have the money to buy out properties that are threatened by the lakes — especially as they try to save their own infrastructure — and there’s little appetite to use public money to help private landowners. But without a government-backed plan to retreat from the eroding coast, property owners have a legal right to defend their homes and continue armoring the shoreline.