Great Lakes
A sign in front of a restaurant on Edgemere Drive in O'Neil Point in Greece, New York, on July 28, 2020, shows frustration with the International Joint Commission. Zbigniew Bzdak / Chicago Tribune 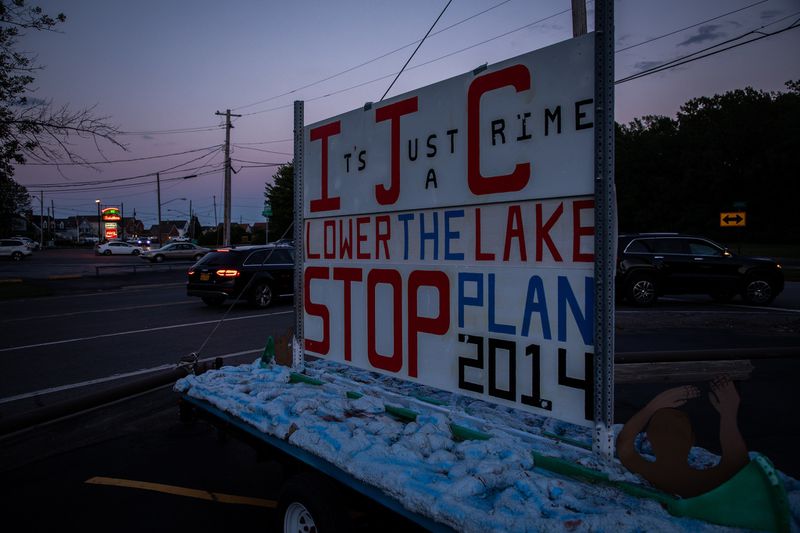 SODUS POINT, N.Y. — On Mother’s Day three years ago, Tom Frank was at his bayside restaurant, Captain Jack’s Good Time Tavern, when a brimming Lake Ontario surged onto the back patio.

Water spilled across the wooden deck, a sun-soaked spot popular with beachgoers and boaters, taking aim at the kitchen and the bar.

“All of a sudden, water’s coming through the floors, through the walls, flooding the restaurant,” Frank said. “You’re fighting to survive.”

Frank’s restaurant was one of many businesses and homes that suffered flood damage in Sodus Point, an upstate New York town of about 900 on Lake Ontario’s southern shore, two hours northeast of Buffalo. From Captain Jack’s and the vacation homes on Greig Street to the town’s wide sandy beach, few areas escaped the damage that storms and a surging lake caused throughout the spring and summer of 2017.

Two years later, the lake swelled again to historically high levels, following another period of heavy rains and — in the eyes of many — exacerbated by a new international regulation plan. The double-barreled floods caused millions of dollars of damage, leaving businesses, homes and parkland soaked, eroded and destroyed.

Flooding is the most conspicuous example of how a changing climate is having a profound effect on Lake Ontario. Drenching rains, wet winters, warmer air and water temperature, less ice cover and more runoff throughout the entire Great Lakes basin, scientists say, have formed a meteorological cocktail that has contributed to unprecedented lake levels, flood-producing storms and the degradation of the shoreline, both natural and developed.

More variability in conditions over shorter periods of time is pushing Lake Ontario — and all of the Great Lakes — as high as ever recorded in wet years, conditions that arrived only a few years after water levels were extremely low.

“This is going to be the new normal,” said Charles Driscoll, a professor of environmental systems and civic and environmental engineering at Syracuse University.

In a special report on climate change, the Tribune is visiting each Great Lake to discover how coastal communities are adapting to a warming world.

To the residents and business owners along the Lake Ontario shore, the last few years have been maddening and nerve-wracking. Restaurants and shops along the New York shoreline have been forced to close. Homeowners have paid thousands of dollars to dry out swamped basements, install shoreline barriers and raise the foundations of their houses. The coronavirus pandemic, and the ripple of economic consequences, has only added to the challenges.