Gulf of Mexico
Fig. 3. In GOM Shelf, LLC v. Sun Operating Limited Partnership, the court relied on federal regulations that is said provide that decommissioning obligations accrue when the party drills a well or installs a platform, pipeline, or other facility. 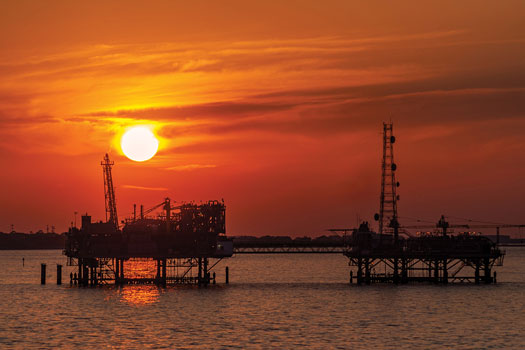 GOM - Who pays? Allocating liability for plugging and abandonment costs in the GOM's Outer Continental Shelf

Lessees and interest-holders in the Gulf of Mexico should carefully evaluate the existing contractual language governing their investments in light of case law and consider adding bond requirements or additional consideration in exchange for a specific, express release of costs associated with decommissioning obligations.

The Gulf of Mexico (GOM) is home to tens of thousands of oil and natural gas wells, with recent estimates calculating that number to be over 53,000. However, with only a small share of those wells actually producing—current estimates place the number at less than 10%—the reality is that a massive number of wells are nearing, or have already reached, the end of their lifespans.

In fact, industry estimates have placed the number of permanently abandoned wells in the GOM at somewhere between 29,000 and 30,000. The cost associated with decommissioning wells is staggering. On average, plug-and-abandonment (P&A) costs surge to $10 million per deepwater well, and approximately $500,000 per shallow-water well. Moreover, expenses associated with P&A activities for end-of-life wells will increase, depending on the type of well, and whether associated structures, like the drilling platform, also require decommissioning, Fig. 1.

The truth is that every well, once drilled, will eventually reach the end of its lifespan, raising P&A obligations and their associated costs. And as this article will explore, liability for these costs generally attaches, even after a sale or assignment of ownership years before a well reaches the end of its lifespan. Given these realities, coupled with the current political focus on well-plugging initiatives and a growing body of case law governing predecessor-in-interest liability for these costs, producers would be wise to focus not only on production, but equally on the significant costs associated with decommissioning, especially when companies divest themselves of these assets.

Liability for decommissioning costs should be understood as two distinct, but overlapping, obligations: 1) a current or past lessee’s or operator’s obligations to the federal government as defined by federal law and regulation; and 2) the various lessees’ and owners’ obligations to one another, as well as to their predecessors in interest, as defined by the applicable contractual documents negotiated by the parties. To analyze the risks and potential costs associated with drilling a well or purchasing an interest in a lease, it is essential to understand these two parallel sets of obligations and potential liabilities.

Fig. 2. (Right) The Code of Federal Regulations provides that “lessees and owners of operating rights are jointly and severally responsible for meeting decommissioning obligations for facilities on leases…as the obligations accrue and until each obligation is met.”

Operators pursuing E&P activities on the Outer Continental Shelf (OCS) are subject to the Outer Continental Shelf Lands Act (OCSLA), as well as federal regulations promulgated by the Bureau of Safety and Environmental Enforcement (BSEE) and Bureau of Ocean Energy Management (BOEM), both agencies of the U.S. Department of the Interior. Since decommissioning obligations and their associated costs can impact all lessees doing business on the OCS, it is important for operators and lessees to be aware of the federal laws and regulations related to and governing these obligations.