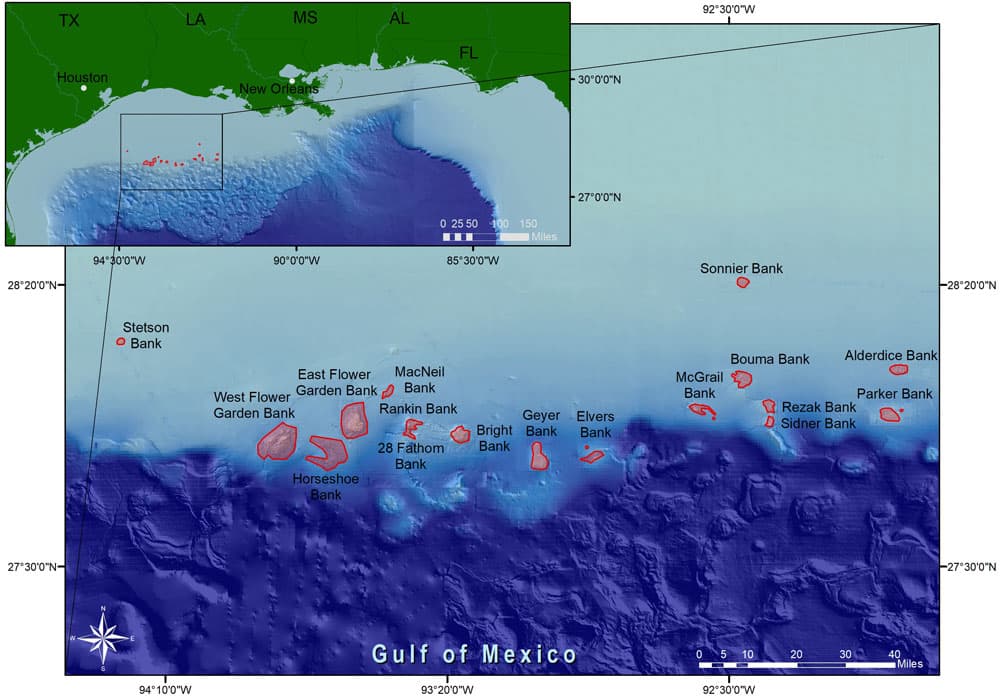 Flower Garden Banks National Marine Sanctuary is one of the only safe havens for Gulf seabirds.

This week, the National Oceanic and Atmospheric Administration, or NOAA for short, announced it will expand the Flower Garden Banks National Marine Sanctuary to nearly triple its current size. Situated on salt domes rising up from the seafloor, Flower Garden Banks is one of only two marine sanctuaries in the entire Gulf of Mexico. Its brightly colored coral reefs are an important feeding ground for seabirds like Northern Gannets and Magnificent Frigatebirds.

After many years of gathering input from the fishing, diving, and conservation communities as well as the oil and gas industry, NOAA will expand the Flower Garden Banks National Marine Sanctuary from 56 to 160 square-miles off the coasts of Texas and Louisiana. The Gulf of Mexico is still recovering from the BP Deepwater Horizon oil disaster 10 years ago, which began in the deep sea. From the smallest plankton, to the biggest whale sharks, the BP oil disaster affected the entire northern Gulf ecosystem. As the $20 billion BP settlement is spent to restore the Gulf, marine protected areas like this one allows the Gulf’s marine life a safe space to rest and feed, free from human disturbance.

Once the expansion takes effect, fishing gear will be limited, which decreases seabird bycatch and minimizes the amount of fish taken out of the ecosystem, providing seabirds with more fish to eat. Additionally, limiting oil and natural gas extraction will reduce the threat of additional oil spills in the Gulf. Without disturbance, populations of marine animals are healthier and more robust. Creating spaces in the ocean with little to no threats for the entire ecosystem to thrive has implications beyond the area of protection. As fish populations grow in number, they spillover to other areas of the ocean, creating more fish for fishermen to harvest and seabirds and other marine wildlife to eat.

With the increasing amount of human disturbances to our oceans and coasts, marine protected areas are more important now than ever for seabirds and other wildlife. Global seabird populations and North American shorebird populations have both declined by 70 percent in under 70 years. Human-caused threats such as development, harmful fishing practices, oil spills, and more have contributed to this decline. To reduce threats, marine protected areas provide spaces in the ocean and along our coasts for sea- and shorebirds to thrive.