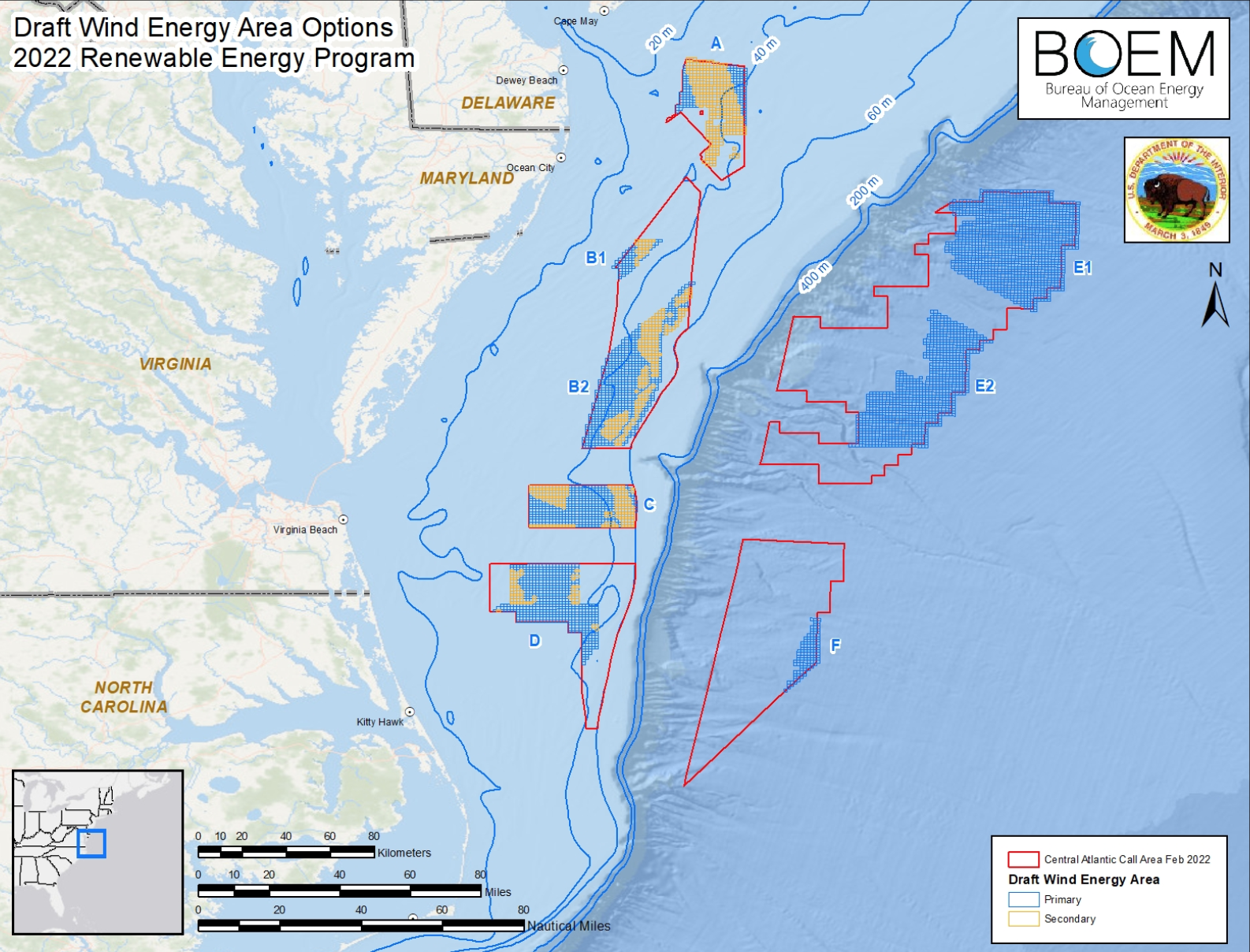 Ranging in distance 19 to 77 miles from the coasts of Delaware, Maryland, Virginia and North Carolina, the WEAs could be the first to venture to the edge of the East Coast outer continental shelf – potentially requiring use of floating turbines, if wind developer choose to bid on the most distant, deepest areas.

BOEM officials say they have been gathering information since the call area was released in April, from sources including the Central Atlantic Intergovernmental Renewable Energy Task Force; other federal agencies and the four states; and input from Delaware, Maryland, Virginia and North Carolina State agencies; input from federal agencies; and “comments from stakeholders and ocean users, including the maritime community, offshore wind developers, and the commercial fishing industry.”

“The advancement of new lease areas in the Central Atlantic is a major milestone for the U.S. offshore wind industry as a second wave of fixed bottom and a first for floating projects are now within view," said Sam Salustro, vice president of strategic communications at the Business Network for Offshore Wind. "Central Atlantic states have set bold clean energy goals and are turning to offshore wind as a reliable, abundant, and affordable source that will form the backbone of their future energy mix. The Bureau of Ocean Energy Management preserved only 50 percent of available wind resources for offshore wind deployment, and it is critical these areas, primary and secondary, remain as intact as possible to fulfill states’ long-term energy demands.”

One Step Closer to Wind Energy in the Gulf of Mexico, Lexology / November 17, 2022

“With growing offshore wind opportunities, the states along the Central Atlantic coast have a chance to become part of the next wave of offshore wind hubs," said National Ocean Industries Association President Erik Milito. "While these states will clearly benefit tremendously from jobs and investment associated with offshore wind development, the benefits will stretch across our nation."

Fishermen and other ocean users have been asking BOEM “to increase the transparency” in how wind energy areas are selected, the agency acknowledges. To meet that call BOEM planners say they are adapting an existing ocean planning model that’s already being used in the Gulf of Mexico.

Consultations with the Gulf shrimp fishing industry led BOEM to exclude the most productive fishing areas from future leasing areas off Galveston, Texas, and Lake Charles, La. That experience and other ongoing studies, to make sure traditional fisheries can co-exist with new aquaculture in the Gulf region, have convinced BOEM planners to take a similar approach in thinking about offshore wind in other regions.

“We thought it was really good idea to work with BOEM on a similar process,” said Michael Celata, BOEM’s Gulf of Mexico regional director, in a meeting Oct. 3 with the Business Network for Offshore Wind’s Gulf working group.

The Southern Shrimp Alliance raised its industry’s concerns in summer 2021, all like the objections that have come up on the Atlantic coast: Displacement of fishermen from traditional fishing grounds and shoreside support infrastructure, damage to fishing gear and safety hazards from wind turbine arrays, and environmental effects on marine life.

The shrimpers suggested adapting the planning model in use for the National Oceanic and Atmospheric Administration’s Aquaculture Opportunity Area Atlases. A modified version is now being used for the central Atlantic wind areas.

BOEM says the central Atlantic areas could be reduced further during that process and further public comment processes. Along with commercial fishing and marine habitat issues, other potential conflicts are military use of the central Atlantic waters and airspace, a potential U.S. Coast Guard (USCG) safety fairway for vessels, and a NASA danger zone downrange from its Wallops Island, Va., launch facility.