International
NASA Earth Observatory image by Joshua Stevens, using Landsat data from the U.S. Geological Survey and the Inter-mission Time Series of Land Ice Velocity and Elevation (ITS_LIVE) project at NASA/JPL-Caltech, and the General Bathymetric Chart of the Oceans (GEBCO). 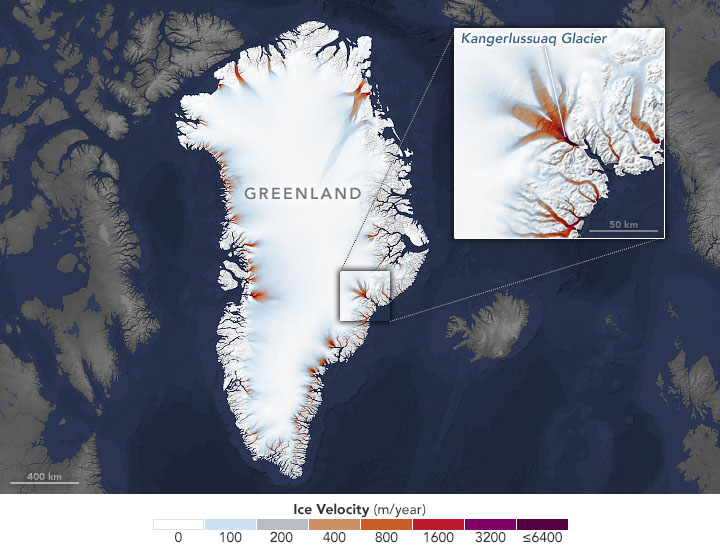 A recent study of Greenland’s ice sheet found that glaciers are retreating in nearly every sector of the island, while also undergoing other physical changes. Some of those changes are causing the rerouting of freshwater rivers beneath the ice.

In a study led by Twila Moon of the National Snow and Ice Data Center, researchers took a detailed look at physical changes to 225 of Greenland’s ocean-terminating glaciers—narrow fingers of ice that flow from the ice sheet interior to the ocean. They found that none of those glaciers has substantially advanced since the year 2000, and 200 of them have retreated.The map at the top of this page shows measurements of ice velocity across Greenland as measured by satellites. The data were compiled through the Inter-mission Time Series of Land Ice Velocity and Elevation project (ITS_LIVE), which brings together observations of glaciers collected by multiple Landsat satellites between 1985 and 2015 into a single dataset open to scientists and the public.

About 80 percent of Greenland is blanketed by an ice sheet, also known as a continental glacier, that reaches a thickness of up to 3 kilometers (2 miles). As glaciers flow toward the sea, they are usually replenished by new snowfall on the interior of the ice sheet that gets compacted into ice. Multiple studies have shown that the balance between glacier melting and replenishment is changing, as is the rate of iceberg calving. Due to rising air and ocean temperatures, the ice sheet is losing mass at an accelerating rate and additional meltwater is flowing into the sea.

“The coastal environment in Greenland is undergoing a major transformation,” said Alex Gardner, a snow and ice scientist at NASA’s Jet Propulsion Laboratory and co-author of the study. “We are already seeing new sections of the ocean and fjords opening up as the ice sheet retreats, and now we have evidence of changes to these freshwater flows. So losing ice is not just about changing sea level, it’s also about reshaping Greenland’s coastline and altering the coastal ecology.”

Though the findings by Moon, Gardner, and colleagues are in line with other Greenland observations, the new survey captures a trend that has not been apparent in previous work. As individual glaciers retreat, they are also changing in ways that are likely rerouting freshwater flows under the ice. For example, glaciers change in thickness not only as warmer air melts ice off of their surfaces, but also as their flow speed changes. Both scenarios can lead to changes in the distribution of pressure beneath the ice. This, in turn, can change the path of subglacial rivers, since water will always take the path of least resistance (lowest pressure).

Citing previous studies on the ecology of Greenland, the authors note that freshwater rivers under the ice sheet deliver nutrients to bays, deltas, and fjords around Greenland. In addition, the under-ice rivers enter the ocean where the ice and bedrock meet, which is often well below the ocean’s surface. The relatively buoyant freshwater rises, carrying nutrient-rich deep ocean water to the surface, where the nutrients can be consumed by phytoplankton. Research has shown that glacial meltwater rivers directly affect the productivity of phytoplankton, which serve as a foundation of the marine food chain. Combined with the opening of new fjords and sections of ocean as glaciers and ice shelves retreat, these changes amount to a transformation of the local environment.

“The speed of ice loss in Greenland is stunning,” said Moon. “As the ice sheet edge responds to rapid ice loss, the character and behavior of the system as a whole are changing, with the potential to influence ecosystems and people who depend on them.”

View this area in EO Explorer

At least 200 of the island’s coastal glaciers have retreated over the past 20 years.

View more Images of the Day: