Southeast
The operation to lift the final section of the Golden Ray wreck began on Saturday. (Copyright 2021 by WJXT News4Jax - All rights reserved.) 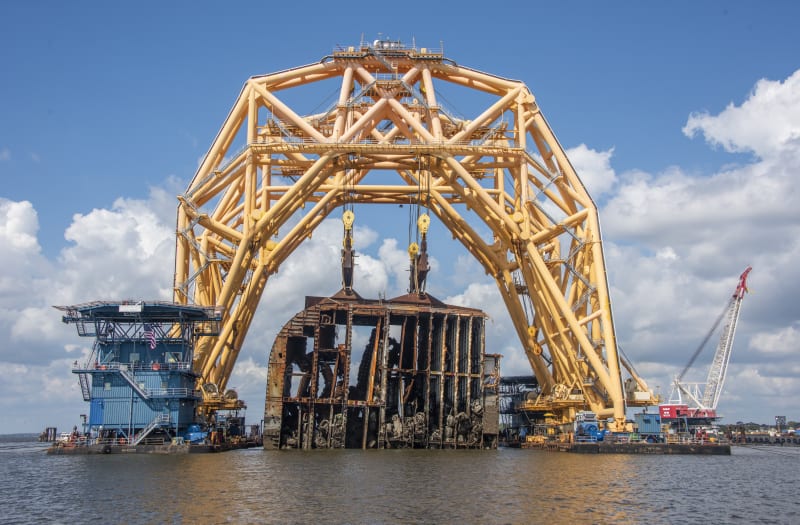 Fishers, crabbers, others claim environmental damage from capsizing, salvage has wrecked their livelihoods

Fishers, crabbers and other seafaring businesses, including airboat tour guides, have filed suit in federal court against the owner of the Golden Ray and the salvage company that dismantled the ship, claiming the environmental damage from the capsizing and salvage has wrecked their livelihoods.

The Korean car carrier capsized onto its side on Sept. 9, 2019, shortly after departing the Port of Brunswick. All crew members were rescued safely, but salvage experts deemed the ship itself, measuring 656 feet long, was a complete loss.

The 93-page suit, which includes maps and photos of the damage, says tens of thousands of gallons of fuel leaked into St. Simons Sound, as well as an unknown amount of oil. The Georgia Department of Natural Resources has still not begun an environmental assessment.

In addition, during the salvage of the capsized ship, there were several fires. The biggest one broke out on May 14, 2021.

It took two years and more than 3 million person-hours to complete the largest removal of the shipwreck. Even after the wreck was considered clear, the impacts lingered, according to the lawsuit by a coalition of seafaring industry workers.

The industries are suing under the Clean Water Act, the Resource Conservation and Recovery Act, and the Oil Pollution Act.

They argue that “oil and oil-based pollutants are likely to remain suspended in the water column and embedded in the sediment for the foreseeable future.”

The lawsuit goes on to say the wreck “created a condition that is harmful to the health of the sound, the surrounding rivers and marshlands, estuaries and beaches.”

The Golden Ray was carrying more than 4,200 vehicles and 300,000 gallons of fuel onboard when it capsized. That fuel leaked into the surrounding waterways and land, including the St. Simons Sound, Jekyll and Cumberland islands, and parts of St. Simons and Sea islands, as well as Mackay River and surrounding marshes.