Southeast
The grassy area in the foreground is where Sea Point plans a new berth for its industrial terminal complex on the Savannah River between Old Fort Jackson and the Elba Island LNG Facility. Mary Landers / Savannahnow.com 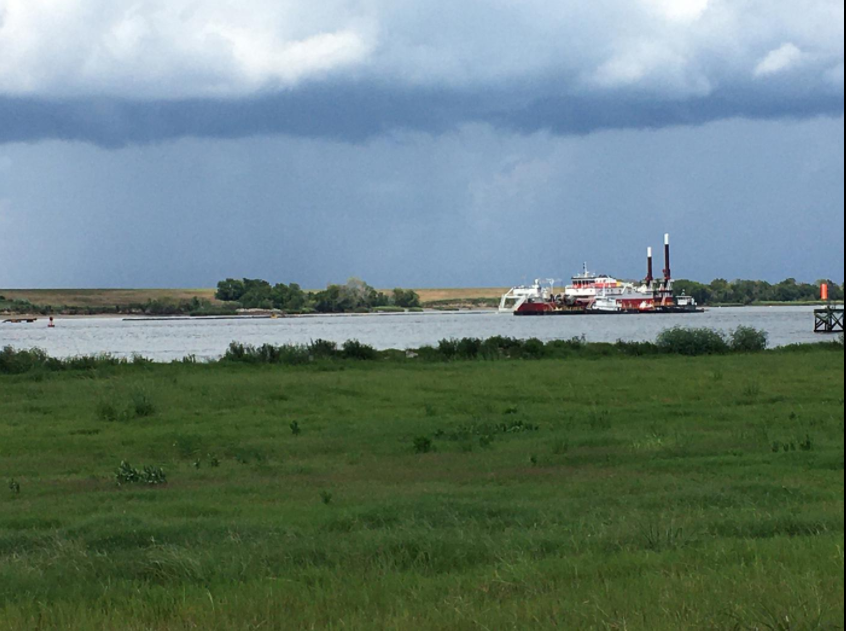 A subsidiary of Dulany Industries is planning to build a marine terminal on its SeaPoint Complex on the Savannah River.

Dulany subsidiary Sulfco filed the permit application with the U.S. Army Corps of Engineers on July 24.

What’s now called SeaPoint Industrial Terminal Complex was once the site of American Cyanamid, then Kerr-McGee, Kemira and finally Tronox. After Tronox went bankrupt in 2009, the property was held in an environmental trust that oversaw its initial cleanup.

Dulany Industries bought the property, which sits between Old Fort Jackson and the Elba Island LNG facility, in 2017. It’s continued the cleanup with an eye to reestablishing a sustainable, greener industrial park on the over 600-acre site.

“The project will include the expansion/redevelopment of an existing industrial facility to include the development of a multi-use deepwater marine terminal adjacent to the Savannah River,” consultant Stuart Sligh wrote in a cover letter accompanying the permit application to the corps. “Much of the project-related construction will be in upland, but the project will require dredging of intertidal wetlands and open water and impacts to 1.8 acres of freshwater wetland to facilitate a new access road into the facility. The project will dredge approximately 2.6 million cubic yards from a 58-acre area (50.25 acres is open water dredging).”

SeaPoint already boasts a small solar farm and honeybee hives at its entrance on East President Street, a sign of things to come, its developers say.

The new berth was part of the plan from the beginning. If approved, it will be about three football fields long and 42-feet deep, built off the river on what is now a grassy field. Dulany Industries considers it vital to a sustainable operation for businesses that would want to move their supplies and products by ship.

Savannah Riverkeeper Tonya Bonitatibus has concerns about the project and its effects on “a multitude of issues related to the river and the city of Savannah,” she wrote in an email.

“This project wants to dredge 50 acres of river but states no impacts to the sturgeon, turtles, whales or dissolved oxygen,” she wrote. “No real impact studies have been done, and just saying it on a permit application doesn’t make it so.”