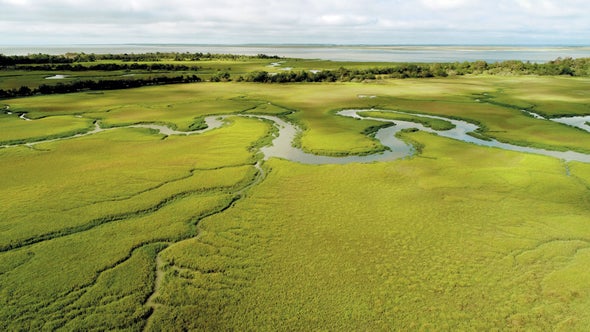 Halfway down Georgia's coastline, Sapelo Island is surrounded by more than 4,000 acres of salt marshes, with vast stretches of lush grasses that blaze gold in the colder months. But this beautiful barrier island is experiencing some of the harshest effects of climate change: seawater intrusion, intense storms and flooding.

And scientists have noticed something more subtle and unusual happening to the island in the past several years. A once inconspicuous burrowing crab is suddenly wiping out swaths of marsh cordgrass, a plant that holds much of the South's coastal marshland in place and protects vulnerable species. The tiny purple marsh crab, Sesarma reticulatum, seems to be reshaping—and fragmenting—the island's marshes.

Sinead Crotty, an ecologist and project director at Yale University's carbon-containment laboratory, used aerial images to document the crab's impact on marshland along the U.S.'s southeastern coast. To investigate the cause of the changes, Crotty and her colleagues combined analysis of the aerial imagery with historical tide data and numerical models of sea-level rise.

Their results, published in the Proceedings of the National Academy of Sciences USA, show the crabs are altering salt marshes' response to sea-level rise by gorging on cordgrass at the heads of tidal creeks. The researchers say rising water levels caused by climate change have softened marsh soil, creating optimal burrowing conditions for the crabs. The crabs' increased activity then results in longer and broader creeks that drain the marshes into the ocean. Over years this process transforms marshes from contiguous grasslands into patches fractured by crab-grazed creeks.