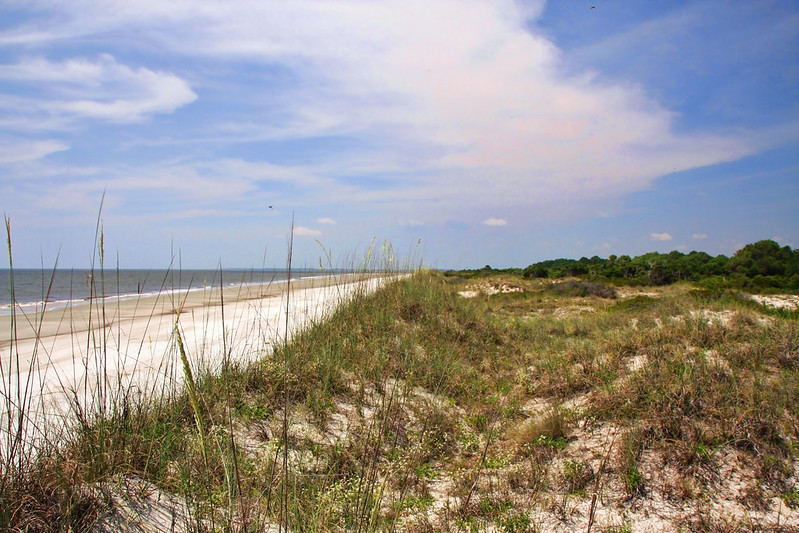 GA - Inside One Georgia Island's Fight Over Basic Public Services

Reginald Hall rises early. Then he pulls on his running shoes, mounts his bike, and starts out from the house where he grew up.

Here on Sapelo Island, an otherworldly landmass off the coast of Georgia, the sandy brown dirt roads crunch under foot or wheel. Oaks boast trunks wide as compact cars. Pines seem best measured by their proximity to the sky. Celestial in their own way are the waxy-leaved magnolias, fragrant when their generous, bowl-shaped white flowers bloom. Green things so narrow most roads that drivers must pull over for a vehicle to pass in the other direction. That system, like so much else here, is maintained without official enforcement. Dangling bunches of silvery brown Spanish moss, a rootless plant with the rare ability to draw all it needs from the air, lend Sapelo the feel of a Southern secret garden—a space defined by a natural beauty that for some is enough to obscure neglect or even brutality.

But nothing compares to the vista at the end of Hall’s morning journey. On Sapelo’s seven-mile stretch of white-sand Atlantic coastline, Hall, 56, likes to stand awhile in silence. At the edge of America, between the waves and the grass-studded dunes, Hall turns his hands and face toward the sun. It is, Hall explains, a singular source of restorative energy. The sun helped sustain his ancestors, enslaved Africans and progenitors of the population today known as the Gullah Geechee, who maintained a unique culture after having been brought to this area. Nearly 1,000 were living on Sapelo just after the turn of the 20th century. Today, Sapelo is believed to be home to one of the last intact Gullah Geechee island communities in the U.S., comprising what Hall says is a mere 26 people.

“What could force people off a beautiful plot of land, an island? Lack of employment and lack of services, that’s what forced them off,” Hall says of the ground in which the ancestors he never knew, along with his grandparents and father, now rest in peace.

On Sapelo, where more than 90% of residents are Black, according to 2017 testimony offered by a Georgia official during a federal lawsuit, there are poisonous snakes, but there are no ambulances. When anyone on the island requires medical evacuation by helicopter, others must form a makeshift landing site by positioning their vehicles in a circle, headlights on. (The precise number of full-time residents is difficult to calculate, as the island attracts many vacationers and does not constitute its own census tract.) There is no person trained to fight fires—and no working equipment for doing so, even if someone knew how. Residents must haul their own trash, and the disposal site is irregularly maintained. On one day in July, after less than an inch of rain overnight, potholes filled with water deep enough that I watched not one, but two, young alligators crawl out.