Southeast
The king tide rises on the back river marsh near Savannah. The marsh is an iconic Georgia landscape, vital to wildlife, to tourism and to fishermen. Stephen B. Morton / Associated Press 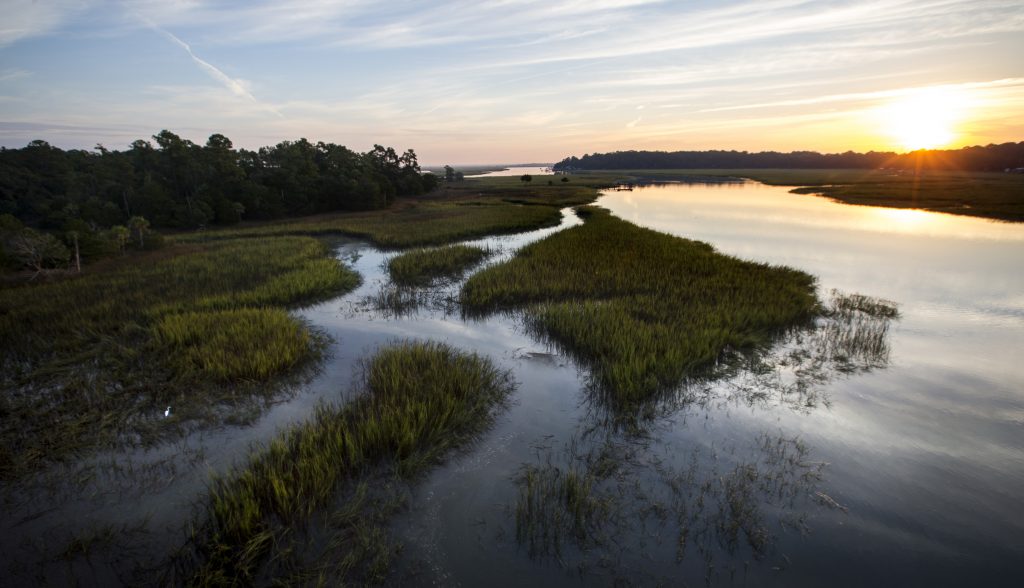 GA - How Georgia Protected Its Salt Marsh 50 Years Ago, and Why That's Important for the Future

Georgia doesn’t have a very big coastline; it’s only about 100 miles. But the coast it does have is lined by salt marsh, the muddy expanse of tall grass and meandering creeks between the mainland and the barrier islands.

“I don’t know that anybody could look out across the Georgia salt marsh, the Golden Isles, and not be filled with ecstasy,” said Georgia writer Janisse Ray, sitting on the edge of the marsh looking towards Sapelo Island. And what is so amazing is that we’ve protected so much of it,” she said.

This year marks the 50th anniversary of the Georgia law that protects the state’s coastal salt marsh.

The marsh is an iconic Georgia landscape, vital to wildlife, to tourism and to fishermen. It serves as a nursery for fish, shrimp and crabs. It’s a wild place where people kayak and birdwatch. And it’s adjacent to valuable real estate, with marsh views seen as an asset.

“I don’t think anything would survive without the marsh,” said Earnest McIntosh Sr., a commercial fisherman and oyster farmer. “I mean, we have to have it.”

The marsh’s value and its beauty might be taken for granted now, but in the late-1960s, there was a proposal to mine Georgia’s salt marsh. To dig it up, then fill it in.

The ensuing fight and the law that got passed to protect the marsh are why Georgia still has nearly 400,000 acres of coastal marsh, about a third of the salt marsh on the entire Eastern Seaboard.

And, though supporters of the law didn’t realize it at the time, Georgia’s Coastal Marshlands Protection Act is also important for the state’s future. Because as the sea level rises, the marshes that got saved back then are helping the state adapt now.

‘The Match That Lit the Dynamite’

The fight to save the marshes started with an Oklahoma company called Kerr-McGee, which wanted to mine about 72,000 acres of marsh near Little Tybee Island for phosphate.

The proposal in 1968 set off alarm bells around the state.

“That was sort of the match that lit the dynamite that put this issue on the front page and in the front minds of Georgians,” said Paul Bolster, a former state representative who recently published “Saving the Georgia Coast,” a book about the history of the Coastal Marshlands Protection Act.

Up to that point, there hadn’t been much development on the coast or on the islands, let alone of the marsh itself.