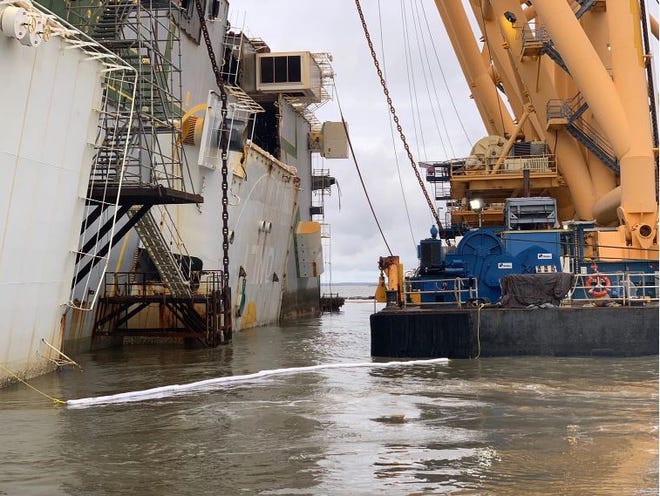 At 656 feet long and big enough to haul more than 4,000 automobiles, the hulking Golden Ray ship has been hard to miss in the St. Simons Sound, where it laid on its side for more than two years.

Now, after years of setbacks from oil spills, a fire, hurricanes and a change in contractors, a salvage crew is working to remove the last section of the South Korean car carrier.

This means the Golden Ray’s head-turning presence off the Georgia coast since September 2019 is nearing an end.

But environmentalists say the removal of the ship only clears the part of the wreckage most obvious on the surface. They are pressing for more details on what will come next to clean marshes and shores of the remaining oil and other contaminants that aren’t so visible.

Conservationists are concerned that agencies like the Georgia Department of Natural Resources might not require an in-depth analysis of the harm to invertebrates and up the food chain, other wildlife, and the local economy.

Fletcher Sams, executive director of the Altamaha Riverkeeper, fears the clock is running out before government agencies declare that there isn’t a need for a comprehensive investigation.

“It’s a no-brainer in my book,” Sams said. “It’s just ensuring that the resources on the coast which contribute in very large parts to the economy are intact in the future. I really feel like without a full assessment, it’s going to be hard for the stewards of that resource, the state Department of Natural Resources, to tell the public that everything’s safe with a straight face.”