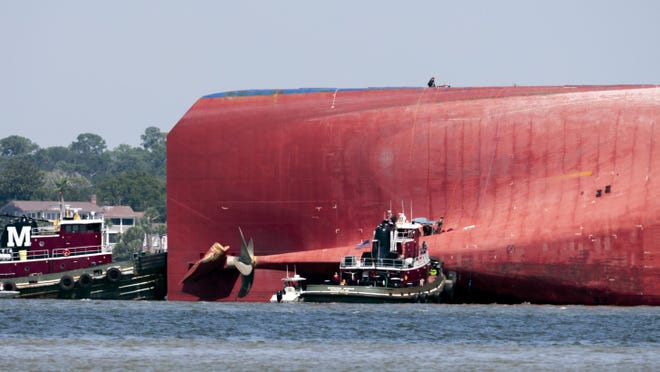 Crews are back to work cutting up a section of the shipwrecked Golden Ray that contains thousands of gallons of fuel as the extensive salvage operation in St. Simons Sound seems doomed to stretch into another Atlantic hurricane season.

Nearly a year after the U.S. Coast Guard and other members of the salvage team expected to complete the removal of the massive capsized car carrier from the shipping channel outside the Port of Brunswick, delays caused by weather, COVID-19 and snafus still plague the project. Environmentalists say they’re not surprised the exhaustive undertaking continues facing obstacles that place the surrounding habitat in danger.

Since the early hours of Sept. 8, 2019, the 656-foot-long cargo ship has lodged in the sand off St. Simons Island where it capsized soon after setting sail for Baltimore with more than 4,000 Kias and Hyundais on board.

A massive floating crane arrived last fall to cut the ship into sections to be hauled away, but that plan hasn’t stayed on schedule any better than the rest of the salvage plan. The removal operation resumed last week after crews added a stronger cutting chain and made other adjustments as response teams watched over oil and debris spills and natural resource advisors monitor potential environmental harm.

If all goes well, it will still take at least several more months before the ship is completely removed from its high-profile perch near the shoreline. The process could be complicated by severe weather when hurricane season rolls around again June 1 and tidal shifts pose a threat to the safety of workers at the floating salvage operation, said U.S. Coast Guard Petty Officer Michael Himes.

The Coast Guard is part of a Unified Command overseeing the salvage project, along with the Georgia Department of Natural Resources and salvage contractor Gallagher Marine Systems.