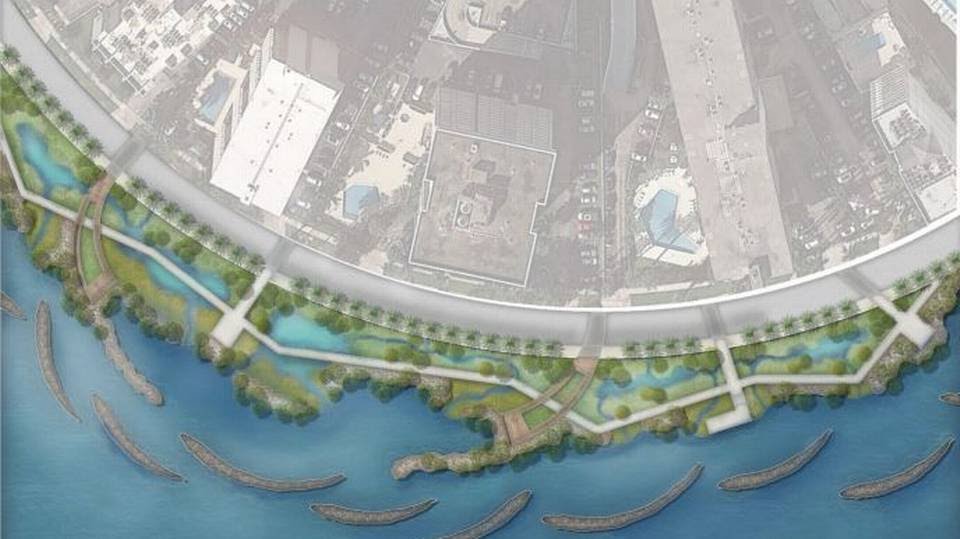 FL - The future of Miami-Dade’s coast: tall walls, landscaped barrier islands or both?

Politicians and residents of Miami-Dade County are mostly on board with the now $6 billion federal proposal to protect the vulnerable coastal community from future storm surge strengthened by climate change.

The one concept nobody in Miami-Dade wants? Installing flood-protection walls — in some places up to 20 feet high — along the coast of Biscayne Bay.

An alternative vision — released this week and promoted by Miami-Dade, Miami and private businesses — would be an even more radical redevelopment of the Biscayne Bay coast. Instead of drab gray walls, the plan shows drawings of a giant earthen dune between the city and bay, speckled with mangroves and ringed with oyster reefs, natural features proven to slow down approaching waves. Between the dune, called a berm, and the city is a moat of sorts, filled with seagrass and more landscaping designed to break down storm surge.

It would look more natural and attractive, but also come at an environmental cost, chewing up acres of existing bay bottom.

“Our residents, our stakeholders wouldn’t and shouldn’t accept the wall as currently proposed,” said Miami Commissioner Ken Russell. “If we get it right, we will not be reversing the unintended consequences of this plan 40 years from now.”

Residents don’t want to be cut off from Biscayne Bay or see their neighborhoods sliced up. Environmentalists object to the mile of the wall that would go directly through the bay, and developers, business owners and politicians worry about the impact on property values.