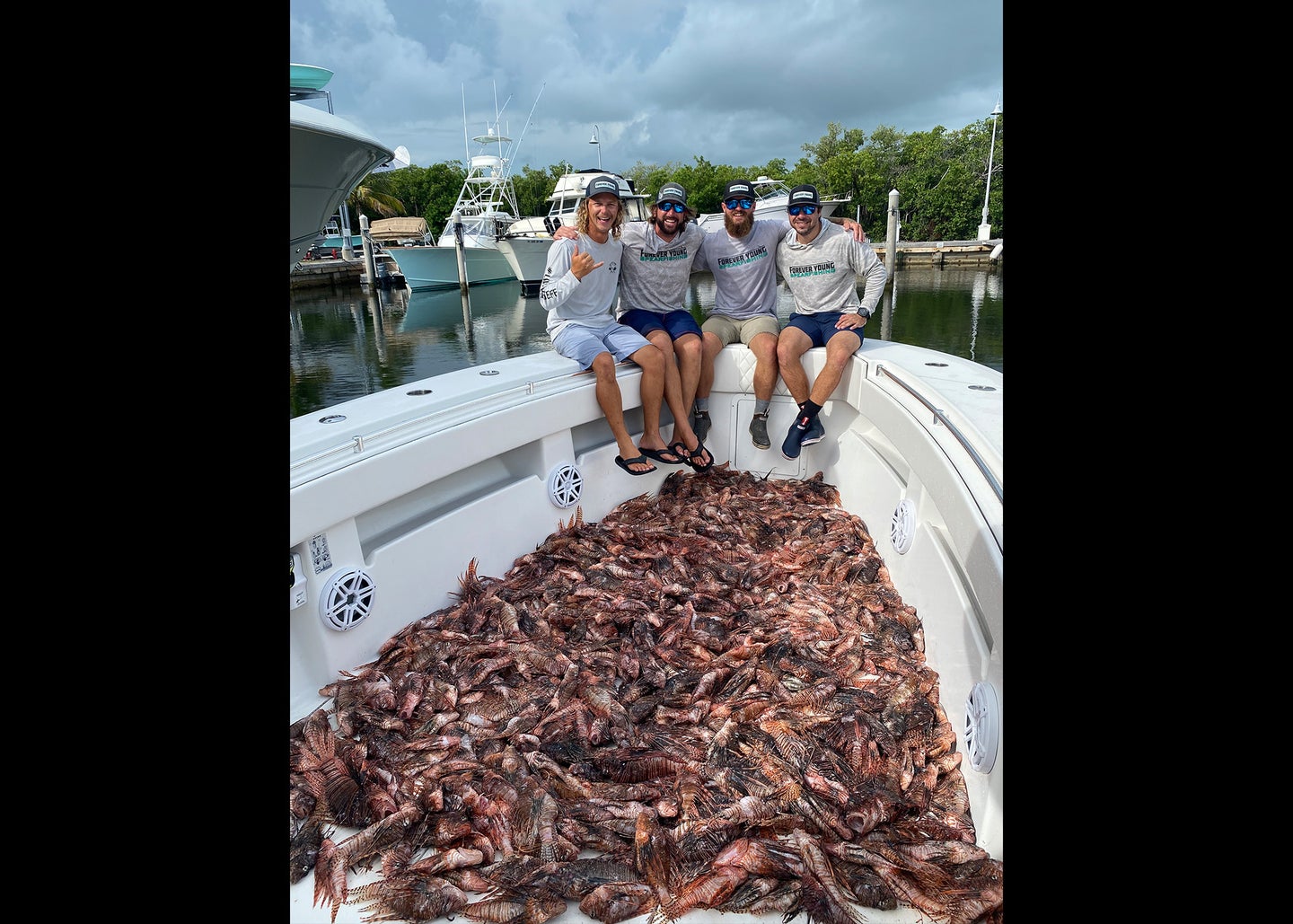 The spearfishermen's massive haul is part of a larger effort to save Florida's reefs from the invasive fish.

Four spearfishermen bagged 564 invasive lionfish in just two days. Team Forever Young executed the impressive feat by diving repeatedly from sunrise to sundown during the Reef Environmental Education Foundation (REEF) 2021 Florida Keys Lionfish Derby & Festival on September 10 and 11. The team’s big haul made up almost half of the tournament total of 1,215 invasive lionfish that were removed during the event, which took place in the waters near Islamorada, Florida. Team Forever Young was led by Captain Tony Young, owner of Forever Young Spearfishing, and included Luke Rankin, Jason Vogan, and Jeffery Tharp. Working together, they could bring up 40 to 50 lionfish on one 45-minute scuba dive. Young says the team focused on picking off lionfish from water with good structure, whether it be coral heads, sharp ledges, or wrecks.

“We were using a pole spear, which is basically a rubber band-driven spear, not an actual speargun,” Young tells F&S. “That’s the most efficient way to hunt them. You can get very close to lionfish, within just few inches.”

Young and his fellow spearfishermen were so effective partly because they guide “lionfish hunting” tripsfor Young’s charter company. The annual REEF Lionfish Derby is a long-anticipated chance for the men to go after the invasive lionfish lurking in the waters off the coast of the southeast U.S. themselves.

“We work hard all year providing the best service we can for our guests, and we love what we do,” says Young. “We love diving and fishing, so the tournament is a trip for just me and my crew, which are all close friends. We have a blast. We just keep trying to do better each year and have a lot of fun doing so.”

Why is Killing So Many Lionfish Actually Good for the Environment?

Lionfish are an invasive species with abundant populations in the coastal waters of the southeast U.S. and Caribbean. They are native to the Indo-Pacific, which includes the South Pacific and the Indian Ocean, but can cause severe ecological damage to American reef ecosystems. They compete for food and space with native species, such as snapper and grouper, and are known to prey on helpful species, such as algae-eating parrotfish, which can lead to seaweed overtaking some reefs. Lionfish reproduce year-round and just one mature female lionfish will release up to 2 million eggs each year. They have no known predators. Lionfish continue to spread in range and increase in population. Though it’s more or less impossible to eliminate the invasive fish entirely at this point, recreational and commercial fishing efforts are currently the best way to mitigate the devastation they inflict on local reef ecosystems.