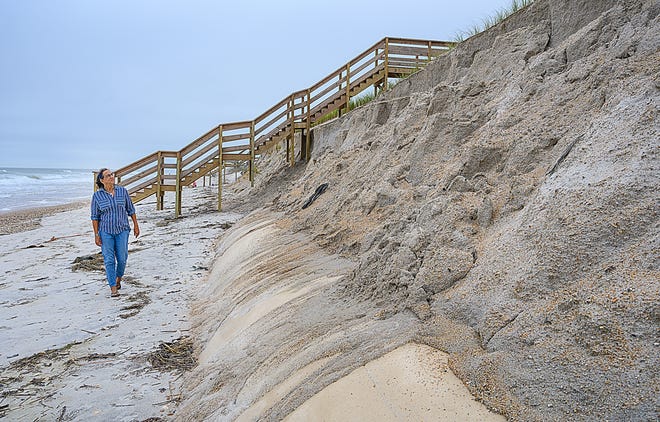 The nor'easter that tore through St. Johns County on Sept. 20 produced more than just high winds and flash-flooding across the region. It caused severe erosion along the coastline, including Ponte Vedra Beach where as much as 4 feet of sand was lost or shifted in some locations.

All Nicole Crosby has to do to see the impact of that erosion is look at the geotextile structures some of her neighbors have erected along a stretch of affluent beachfront property to guard against coastal flooding.

This kind of coastal armoring is allowed by permit through the Florida Department of Environmental Protection, but maintenance is up to the homeowner, and If a permit-holder does not comply with these requirements, the FDEP can order them to remove the tubes. Permit-holders must also submit sand depth measurements annually and after a major storm event.

Geotextile tubes are supposed to be covered by at least 3 feet of sand. But after the recent nor'easter, the beige-colored tubes have begun to poke through the sand like bunker walls caving in upon each another.

Crosby, a Ponte Vedra Beach resident, said, "They have been an absolute epic failure. That sand has just blown away like nothing and it's created a series of mini avalanches that are a real public safety issue."

She claims that with the tubes not being buried into naturally packed sand, the dunes have become concave and are a hazard should someone fall down on them.

"They're as hard as a block of cement," Crosby said.