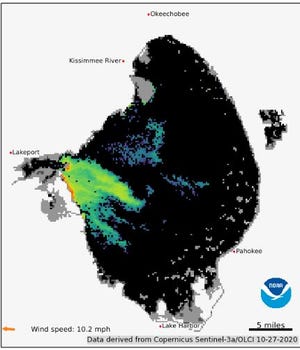 An Israeli firm hired to prevent algae in Lake Okeechobee water from reaching the St. Lucie River hasn't had to use its algicide yet, but some environmental scientists are concerned about the chemicals and how the company got the job.

Under a $945,000 state contract, BlueGreen Water Technologies deployed at the Port Mayaca Lock and Dam, where discharged lake water enters the C-44 Canal and heads toward the estuary, soon after the Army Corps of Engineers began discharges Oct. 14.

Although satellite images show a significant bloom of cyanobacteria, commonly called blue-green algae, in the lake, no algae-laden water has been discharged through the dam's gate — yet.

None of the recent water samples taken in the lake near Port Mayaca contained any visible blue-green algae or tested positive for toxins.

A South Florida Water Management crew reported seeing low-density clumps of algae Oct. 21 in the northwest part of the lake. One sample contained the toxin microcystin at a level of 5 parts per billion.

A district crew reported bright green algae in a "medium to high density" bloom Oct. 22 along the western shore north of Clewiston. One bloom contained microcystin at a level of 13 parts per billion.