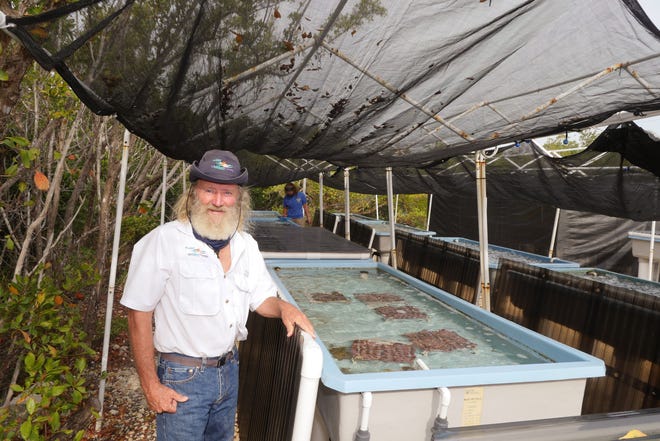 SUMMERLAND KEY – Dr. David Vaughan, one of the scientists who pioneered the technique of microfragmentation as a way to reduce the time it takes to rebuild coral reefs, always said he wanted to plant a million corals before he retired.

The 67-year-old scientist, who began part-time as director at Mote Marine Laboratory’s Elizabeth Moore International Center for Coral Reef Research and Restoration in 2018, ultimately retired that year to start the nonprofit Plant a Million Corals Foundation.

The week surrounding Earth Day 2021 marked the limited release of “Active Coral Restoration: Techniques for a Changing Planet,” a book he edited and co-wrote with dozens of contributing authors.

Through Plant a Million Corals, Vaughan has developed a way to place small-scale coral nurseries in neighboring Caribbean countries. The first one, built using a 40-foot shipping container, is ticketed for Grenada but still sits on Summerland Key because of COVID-19 pandemic shipping restrictions.

Those nurseries – modeled after the one he helped establish at the Boy Scouts of America Florida National High Adventure Sea Base on Summerland Key – can eventually produce 10,000 corals a year through microfragmentation.

“The retirement was really just retirement from a research institution in order to be more hands-on and transfer of technology to be more international,” said Vaughan, who is still part of the Mission Iconic Reefs working group but is concentrating the efforts of his nonprofit on the Caribbean.