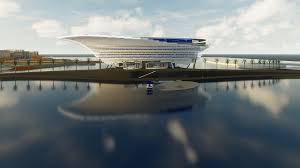 SARASOTA COUNTY — County commissioners committed Wednesday to give the $20 million requested by Mote Marine Laboratory for its proposed $130 million aquarium on county-owned land near Interstate 75.

The catch is that they’re going to use tourist development taxes, meaning it could come at the expense promoting the county to future visitors. The precise formula remains to be worked out.

The Tourist Development Council, made up of hotel owners and other representatives of the tourism industry, will further debate the details of the funding, before the issue comes back before county commissioners for a final funding plan approval.

The leaders of Visit Sarasota County and the Arts and Cultural Alliance of Sarasota County objected to the prospect of losing an estimated $1.2 million in annual funding dedicated to marketing the area to the Mote project.

Virginia Haley, the president and CEO of Visit Sarasota County, the local tourism promotion agency, said that the expected cuts to pay for the Mote facility, combined with past reductions in the tourist tax revenue allocated to the organization, will have a negative impact on the county’s ability to generate tourism-related money in the future.