Southeast
Ron Starling, the founder of the Night Sanders Campers, says he's been visiting American Beach since he was a child. Sky Lebron / WJCT News 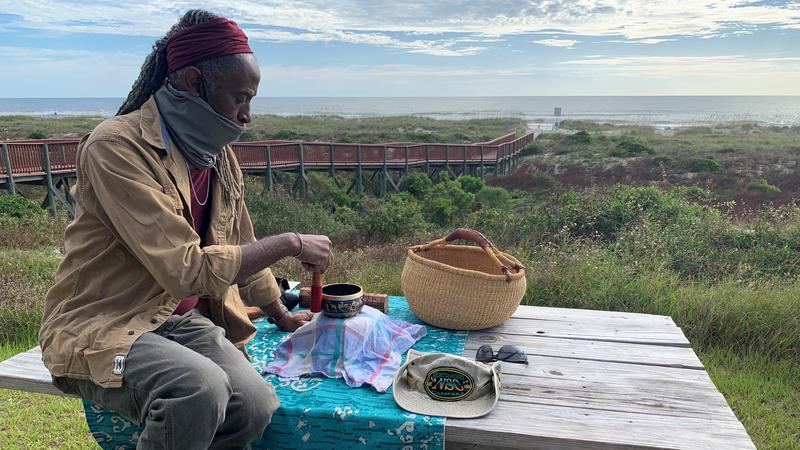 Ron Starling comes to historic American Beach at least once a week.

He sits down at a nearby picnic table, lights some incense, and strikes a small Tibetan singing bowl.

“I was under the age of 10 when I first came to American Beach, and ever since then, I've been coming back as many times as I possibly can get up here,” Starling said.

Abraham Lincoln Lewis, Florida’s first Black millionaire, bought American Beach in the 1930s. It was one of the state’s few coastlines African Americans were allowed to enjoy prior to desegregation.

Starling began camping there in the late 90s.

“I survived an aneurysm on September 11, 1998,” Starling said. “After I came from rehab and that session of renewed life, I wanted to come out here and have lunch.”

What started as lunch ended up with Starling camping overnight with some friends, and thus began a 22-year tradition for a group that would become the “Night Sanders Campers.” The group now has its own logo and flyers for bi-yearly events, usually during the months of May and October.

At its peak, 80 to 100 campers would gather to learn about the history of American Beach, eat, and attend talks.

Starling said he’s planned events for the group to head out to Big Talbot Island, Fort George, the American Beach Museum, and even host a health fair.

“Or you just might want to sit there on your beach chair and read a book and take a nap,” he said.

But now, Starling says the tradition for his group and a few others is in jeopardy.

A new proposed ordinance would add extra layers of regulations for beach campers, including: