Southeast
Map of sample regions and study sites (map was based on ArcMap Version 10.7 base image). 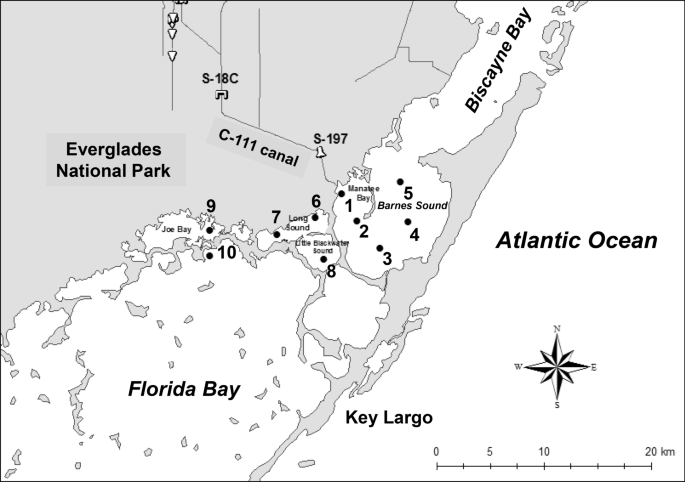 A microscopic study of microplankton in two coastal lagoons in the Florida Keys coincidently, and unexpectedly, revealed the widespread presence of high concentrations of polystyrene microplastic particles.

The polystyrene particles were first observed in the second year of a 2-year study of phytoplankton communities, with peak densities in the spring/summer of 2019 at all ten sampling sites in the two lagoons. Polystyrene particle densities reached levels up to 76,000 L−1. The particles ranged in size from 33 to 190 µm, similar to the size range of microplanktonic algae (20–200 µm). Over the period of peak polystyrene densities, average particle densities were similar to average densities of microplanktonic algae cells. The latter observation highlights the potential significance of the microplastic particles for the ecology of the pristine waters of the Florida Keys, if they persist.

Since the development of synthetic polymer production in the early twentieth century the disposal of plastic materials into the environment has grown exponentially throughout the globe1,2,3. Plastic materials are carbon-based polymers made mostly from petroleum. Unfortunately, plastics have very slow rates of degradation, which can result in persistent presence in the environment for decades to millennia2,4,5. The United Nations Environment Programme considers plastic contamination a critically important environmental issue facing the global community6. Regionally, population size and waste management practices influence the output of plastic debris into the marine environment and without infrastructure improvements the quantity released into the oceans is expected to continue its increase7.

Plastic waste in the environment comes in many visibly obvious forms, known as macroplastics, such as plastic bags, drinking straws, milk jugs, rope, netting, food utensils and containers, floats, plastic bottles and cigarette filters8,9,10,11. The scope of macroplastic accumulation is evidenced by littered shorelines around the world. While macroplastics are the most visible components of plastic contamination very small particles, known as microplastics, may be just as important3,12. One of the initial observations of microplastics was in the early 1970s when small plastic particles were observed in water samples collected with a plankton net13. At the first international microplastic workshop plastic particles less than 5 mm in diameter were defined as microplastics14. In 2012, Hidalgo-Ruz et al.15suggested two size classes of microplastics, 1µ–500 µm and 500 µm–5 mm, for the purpose of reporting. Since their discovery it has become obvious that microscopic plastic particles are widespread in the ocean and have accumulated in pelagic and sedimentary habitats5.

Here, we report on an observation of high concentrations of polystyrene microplastics in two coastal lagoons of the Florida Keys, widely viewed as among the most pristine marine waters along the eastern seaboard of the United States. The observation coincided with a study of the impact of coastal freshwater discharges on the ecology of phytoplankton communities in the two lagoons. The size of the polystyrene microplastic particles observed in the water samples fell within the range associated with microplanktonic algae, 20µ–200 µm16. The peak numerical abundances of the polystyrene microplastic particles were in the same abundance range as microplanktonic algae. While not visually obvious, the presence of such high concentrations of microplastics, if persistent, may have environmental consequences, such as disruption of food webs3,17,18,19 and alteration of microbial processes20.

Two coastal lagoons in the Florida Keys were included in this study, northeast Florida Bay, and Barnes Sound (including Manatee Bay) in the southern-most region of the broader Biscayne Bay ecosystem. Both regions are shallow, with depths less than 2–3 m and are characterized by extensive seagrass beds and fringing mangrove communities21,22. The study region is located in the sub-tropical environment of south Florida, which is characterized by modest seasonal temperature differences, and a dry season (November to May) and wet season (June–October), which coincides with the tropical storm season. The lagoons are part of a biodiverse marine ecosystem which provides food, shelter and nursery grounds for numerous fish and invertebrate species, including sponges, shrimp, spiny lobster, stone crab, as well as wading bird and marine mammal populations23,24.