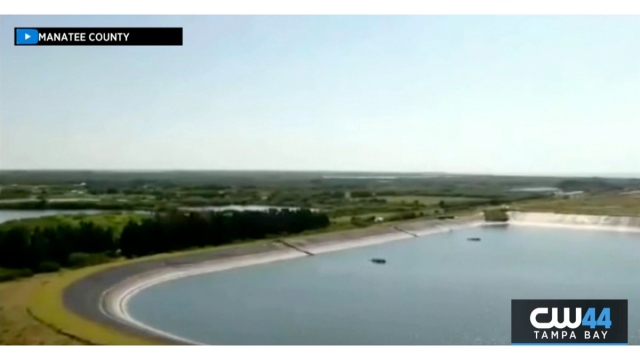 PINEY POINT, Fla. (CW44 News At 10) – Tuesday morning Dr. Scott Hopes, Manatee County Administrator, announced engineers have confirmed there is not a second breach in the reservoir. He says the infrared drone detected temperature coming from a plant that was growing inside of the pond over the weekend.

Manatee County leaders say the 20 new water pumps being installed will increase the removal of water from 35 million gallons to almost 100 million per day.

U.S. Representative from Florida, Vern Buchanan said regarding the drastic measures, “Enough is enough. I’m angry about it, frankly. I’m going to bring that intensity to ensure that we are doing what we need to do to get this fixed.” The United States Army Corps of Engineers, The Environmental Protection Agency, The Department of Environmental Protection and congressional leaders are coming together to find a solution. “I am concerned about the threats to public safety, homes, as well as businesses, and then of course, marine life,” said Buchanan.

Over 300 homes have been ordered to evacuate in the area around Piney Point, a former phosphate plant. While that area is shut down, officials say they are learning more about the leak.

Jacob Saur, Manatee County Director of Public Safety says, “At approximately 2 a.m. an infrared drone identified a signature that could indicate a second [breach] at the engineer-evacuated site.” That possible second breach; however, was later identified as a plant growing in the pond. “They are flying [drones] every hour and on the hour to give our emergency operations center and our decision-makers a real-time view of what is occurring.” Saur says engineers installed a 5,000-gallon-per-minute tap to help remove the water in addition to the 20 pumps being activated on Monday.

Nicholas Azzara, Manatee County Spokesperson, says the main goal is to avoid a full breach of the reservoir because pressure from a full breach could cause another breach at a nearby reservoir that holds radioactive water.

Dr. Scott Hopes, Manatee County Administrator, says “You can see how within probably 48 hours if all those flows continue, we will be in a situation where we will no longer have that risk of that full breach which would send that 20-foot wall of water [into the surrounding community].”