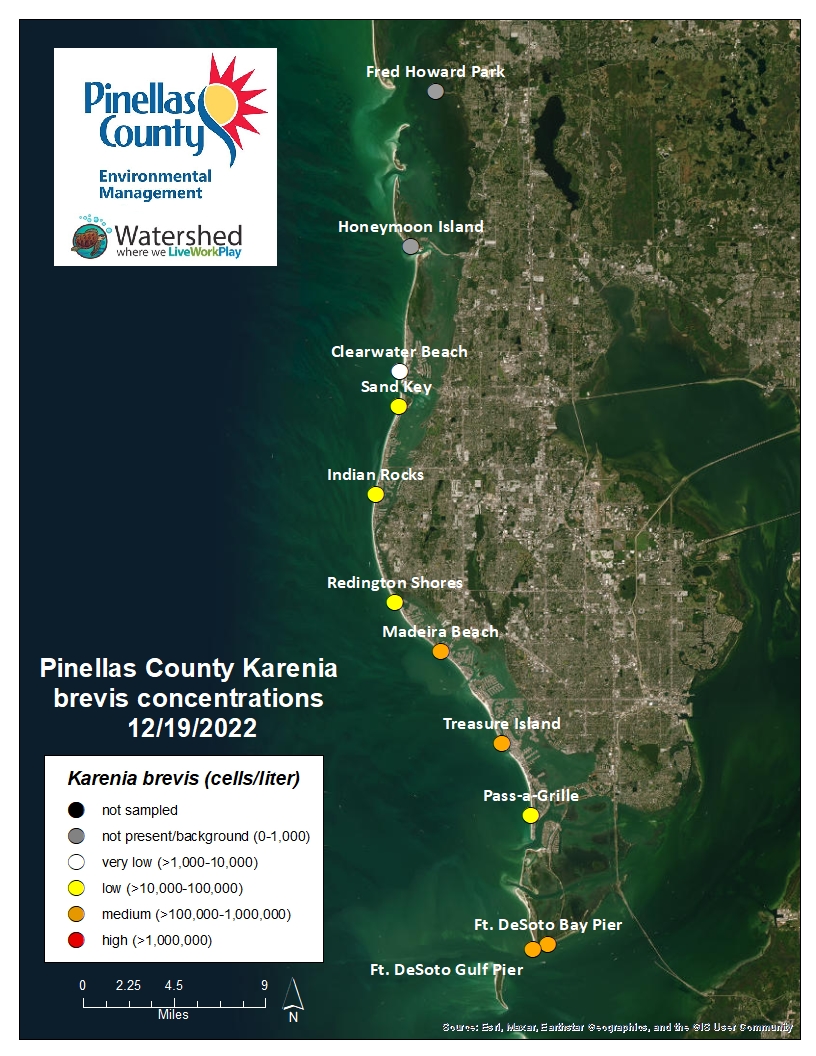 According to the Bradenton Herald, red tide has spread to the south end of Pinellas County. In Anna Maria Island and off the northeast side of the island there were medium levels of red tide detected. High levels were found further offshore and near the mouth of Lower Tampa Bay. The red tide was identified in 76 water samples off of Hillsborough, Pinellas, Manatee, Sarasota, Charlotte, Lee and Collier counties over the past week. Reducing the nutrient loads in the water will help decrease the levels of red tide according to the Sarasota Bay Estuary Program Director.

A bloom of the toxic algae known as red tide continues to plague parts of Southwest Florida’s coastline this week with fish kills and respiratory irritation. Red tide has persisted since October, when elevated levels of algae reached the coast shortly after Hurricane Ian stirred up the Gulf of Mexico.

“By virtue of killing fish, it generates its own nutrient supply,” University of South Florida emeritus oceanography professor Robert Weisberg said in October, when the bloom was just beginning to appear on the radar. “Once it does that, it’s off and running, and it’s very hard to stop it.”

As for what causes a bloom to dissipate, scientists still don’t have a solid answer. However, historical patterns have confirmed a typical pattern for the blooms, according to Cynthia Heil, director of Mote Marine Laboratory’s Red Tide Institute in Sarasota: A red tide usually starts in late summer or fall, lasts five to seven months and ends by spring.

As the densest part of the current bloom has drifted north in recent days, algae levels have lessened somewhat around Sarasota County, but reports of dead fish and breathing irritation continue to come in from the county’s public beaches, including Siesta Key. The bloom’s presence is also stronger around Anna Maria Island and Tampa Bay, water samples and local reports show.

It is also wrapping around the south end of Pinellas County, where impacts have already begun to hit some beaches. In Manatee County, fish kills and respiratory irritation were reported in Anna Maria, Holmes Beach and Bradenton Beach this week.

Water samples collected by Florida Fish and Wildlife Conservation Commission and partners on Monday confirmed red tide’s presence. Wildlife officials determine the severity of the algae by measuring the number of cells of Karenia brevis — the microscopic organism that causes red tide — found in a liter of water.

At levels of medium and above, the algae is considered to be at bloom strength, and it is more likely to cause harmful impacts to human health and the environment.

For more information about the red tide: http://pinellas.floridahealth.gov/programs-and-services/environmental-health/water-programs/red-tide/index.html.