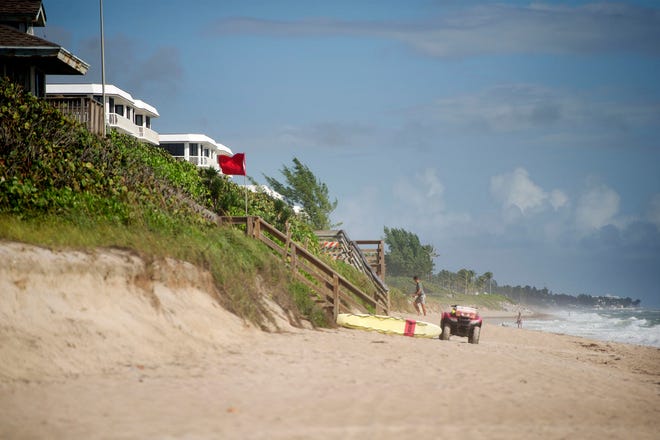 Following the Midtown Beach renourishment in May, Phipps Ocean Park is next in line to receive new sand to replace losses from Hurricanes Matthew and Irma.

The project, which was presented at the Shore Protection Board meeting last week by Coastal Program Manager Rob Weber, will dredge approximately  400,000 cubic yards of offshore sand and place it on the beach between Sloan’s Curve and the Ambassador Hotel, near Palm Beach County’s R.G. Kreusler Park.

The project was originally scheduled to start at the same time as the Midtown nourishment  project, but it was pushed back to November, after the end of sea-turtle nesting season on Oct. 31.

The work also includes stockpiling 85,000 cubic yards of sand that will be hauled by trucks to dune-restoration areas throughout the town and South Palm Beach. South Palm Beach will reimburse the town for that work.

The last time Phipps Ocean Park was replenished was in 2016. That project, which included all South End beaches, cost $17 million.

“Just as we did in 2016, we’re hoping to stockpile materials so we can efficiently and economically take offshore sand and place it in areas where we don’t do beach nourishment in the form of dunes like in Sloan’s Curve area and Reach 8 (between the Lake Worth Municipal Beach and south town limit),” Weber said.

He explained the dredging will occur first and is set to be completed some time in January, leaving the trucking and dune portion for February, March and into April with all the work finished by May 1. The Phipps Ocean Park nourishment is a town project, so the price is still being negotiated, Weber said.

“Because we had additional time in the off-season, the project was put out to bid by the town just last month. ... We’re trying to see if we can get an even better price than the Corps (U.S. Army Corps of Engineers) was able to get for Midtown,” Weber said.