Southeast
A community demonstration in January at Ken Thompson and John Ringling parkways in opposition of Ocean Era's request to build a fish farm 45 miles off the coast of Sarasota. Opponents to the project again vocalized their concerns during a virtual hearing on Sept. 30, 2020. Thomas Bender / Sarasota Herald-Tribune 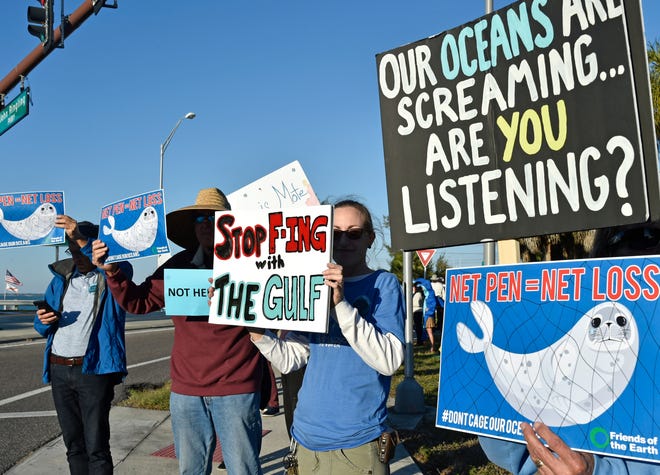 Because the U.S. Army Corps of Engineers will not hold a public hearing on the construction of a controversial fin fish farm 45 miles off the coast of Sarasota, opponents took it upon themselves to be heard.

The mayor of the coastal city of Sarasota, a beach wedding photographer, environmentalists, fishermen and dozens of others testified in a virtual ad hoc meeting on Wednesday hosted by the environmental group Friends of the Earth.

Opponents said the proposed offshore fish farm demonstration pen by a Hawaii-based company, the first such project in the Gulf of Mexico, would create pollution in the form of fish waste, spread diseases to wild fish populations and increase competition with fishing companies that depend on wild catches.

"Since this is a private company, shouldn’t they accept some risk? Why should Florida businesses and taxpayers be on the hook if this doesn’t work out," Tannen said.

But echoes of these concerns may fall on deaf ears, as federal and state lawmakers have already signaled their desire to move forward.

The fish farms are being touted as a silver bullet to boost seafood production, provide jobs and reduce the $15 billion seafood trade deficit that comes from the nation importing over 85% of its seafood.

The National Oceanic and Atmospheric Administration, under President Donald Trump’s recent executive order on seafood, has chosen the Gulf as one of 10 established Aquaculture Opportunity Areas.