Southeast
via Our Islands, Our Future 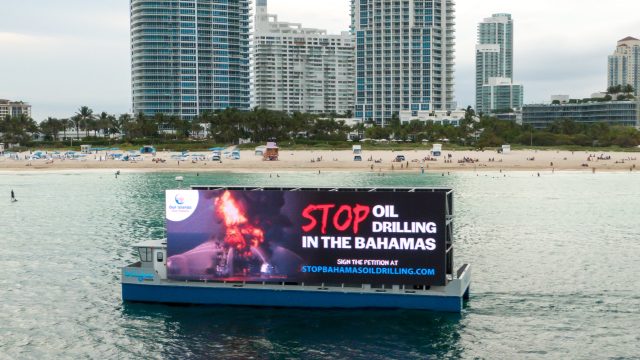 NASSAU, BAHAMAS — On South Florida beaches, a Florida-based multimedia company has over the past few weeks displayed billboards against Bahamas Petroleum Company’s (BPC) planned exploratory oil drilling, according to environmentalist coalition Our Islands, Our Future.

According to a statement by the coalition: “Bahamas oil drilling opponents are thanking Ballyhoo Media for its ‘fantastic’ effort to warn South Floridans of the dangers of offshore drilling, set to commence in days just a stone’s throw away from their shores.

“Over the past few weeks, Ballyhoo Media, a pioneering water-based multimedia company, hosted large digital billboards reading ‘Stop oil drilling in the Bahamas’ and featuring images of the pristine beauty of the country’s marine environment, as well as the horrors of recent drilling disasters.

“The Miami company’s custom-built barges displayed the billboards just off some of South Florida’s busiest beaches, in full view of beachgoers.”

BPC is expected to commence drilling an exploratory oil well in the near future. Stena Drilling’s Stena ICEMax drillship, which BPC will be using for its exploratory well, was expected to arrive in Bahamian waters earlier this week.

But environmentalists have continued opposing the drilling and appealing to the government to stop BPC from proceeding.

The Ballyhoo Media billboards against the drilling show a variety of images, such as an aerial view of the Deepwater Horizon oil spill that occurred in 2010 in the Gulf of Mexico, a pod of dolphins swimming near the proposed BPC drill site and a turtle interacting with a scuba diver. The images are meant to convey the group’s concerns about a potential oil spill and the impact it could have on local marine life.