Southeast
FILE - A group of manatees are pictured in a canal where discharge from a nearby Florida Power & Light plant warms the water in Fort Lauderdale, Fla., on Dec. 28, 2010. (AP Photo/Lynne Sladky, File) Lynne Sladky) 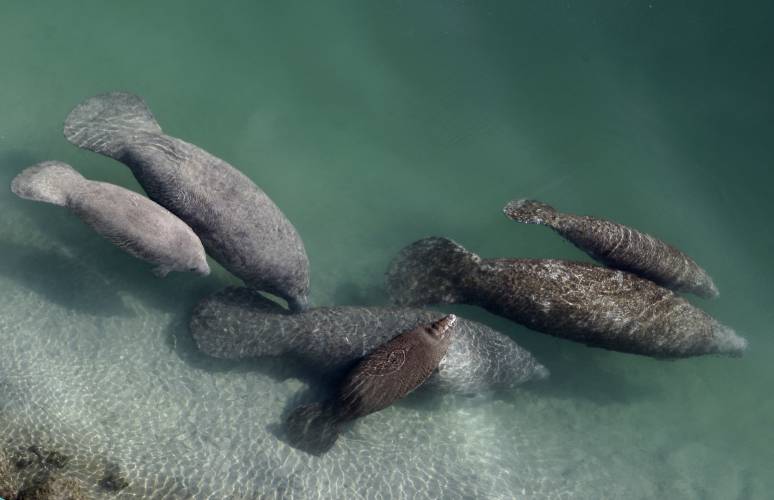 ST. PETERSBURG, Fla. — Fewer manatee deaths have been recorded so far this year in Florida compared to the record-setting numbers in 2021, but wildlife officials cautioned Wednesday that chronic starvation remains a dire and ongoing threat to the marine mammals.

Between Jan. 1 and July 15, about 631 manatee deaths have been confirmed by the Florida Fish and Wildlife Conservation Commission. That compares with 864 during the same period last year, when a record number of manatees died mainly from a lack of seagrass food, which was decimated by water pollution. The five-year average of manatee deaths in that time frame is 481.

Despite some glimmers of hope, wildlife officials said during a news conference Wednesday that manatees continue to face dwindling food options and many survivors have been severely weakened by malnutrition, which leaves them more vulnerable once cold weather sets in.

How manatees fare this summer when more food is available will determine how they survive in winter, said Martine de Wit, a veterinarian overseeing necropsies and coordinating rescues of ill manatees for the state wildlife commission.

“There is not enough high-quality food for the animals,” de Wit said, showing slides of necropsied animals with severe internal damage from starvation. “It’s going to be long lasting. It’s going to be years before you can measure the real effect.”

Manatees, the large, round-tailed mammals also known as sea cows, were already listed as a threatened species when the unprecedented die-off became apparent about a year ago. The main cause is pollution from agriculture, septic tanks, urban runoff and other sources that is killing the coastal seagrass on which the marine mammals rely.

That led to an experimental feeding program last year in which more than 202,000 pounds of lettuce funded mainly by donations was fed to manatees that traditionally gather during winter in the warm waters near a power plant on Florida’s east coast. Officials say they are still studying the impact of that feeding program and weighing whether to do it again as temperatures drop this winter.

“Did it have an effect? I’d like to think that it did,” said Tom Reinert, a regional director for the wildlife commission. “We’re working day in and day out to make sure we’re prepared for next winter.”

There are about 7,500 manatees in the wild in Florida, according to wildlife commission figures. They have long struggled to coexist with humans. Seagrass-killing pollution and boat strikes are now the main threats facing the beloved creatures.