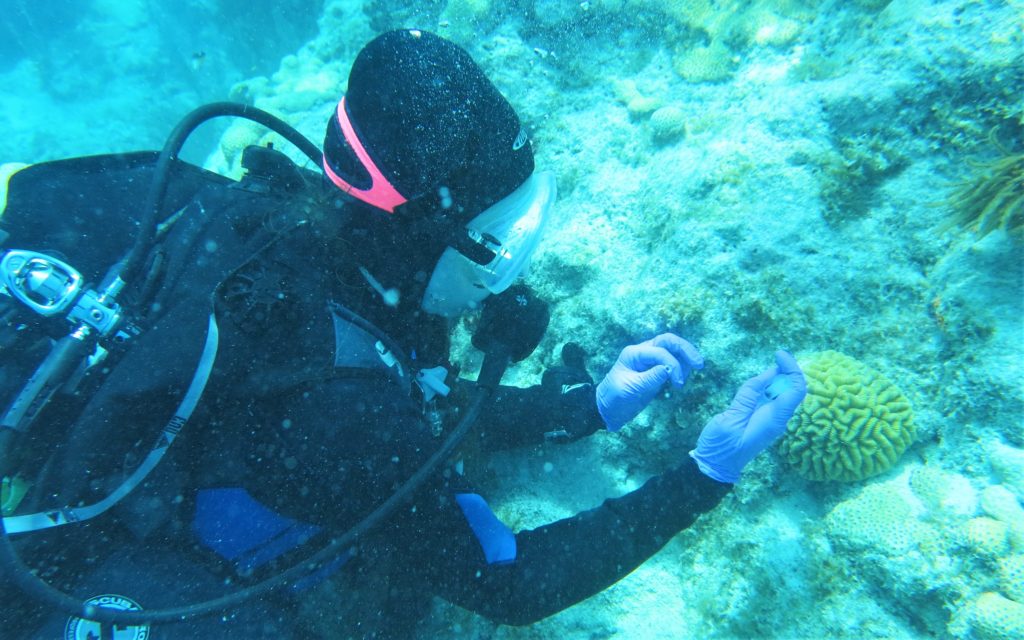 New research on stony coral tissue loss disease reveals similar “bacterial signatures” among sick corals and nearby water and sediments for the first time. Results hint at how this deadly disease might spread, and which bacteria are associated with it, on Florida’s Coral Reef.

This study is only the second peer-reviewed publication focused on characterizing the community of bacteria (the bacterial “microbiome”) associated with these sick corals—a critical effort because the disease is believed to be caused by one or more bacterial pathogens.

Stony coral tissue loss disease has spread like wildfire through more than 90% of Florida’s Coral Reef since 2014 and reached several Caribbean sites recently. It represents one of the most urgent and devastating challenges affecting brain, maze, boulder, star, pillar and other slow-growing coral species that form the very foundations of Florida’s Coral Reef. The disease can form hotspots of more than 140 kilometers (87 miles) at once and spreads at a persistent pace, with mortality rates of 66-100% on the most highly susceptible species.

Studying the disease is essential for saving a threatened natural treasure: Florida’s Coral Reef, also known as the Florida Reef Tract, provides more than $8 billion in economic impact, attracting visitors, protecting coastlines from major storms and supporting diverse life including fisheries. However, Florida’s Coral Reef has lost all but 5% of its living coral cover in recent decades and is struggling to survive amid the growing pressures of multiple diseases, climate change impacts (increasing water temperature and ocean acidification), pollution and more.

So far, studies suggest that stony coral tissue loss disease involves one or more bacterial pathogens carried in water and possibly sediments. Laboratory studies are working toward identifying the pathogen(s) and one previous field study identified five bacteria families associated with the disease lesions on wild corals—but none were found across all four coral species examined, and the study didn’t focus on how the disease is transmitted to new corals. Until now, studies on disease transmission took place in laboratories or used existing data to make inferences—for instance, comparing water-current speeds with movement of the disease front.