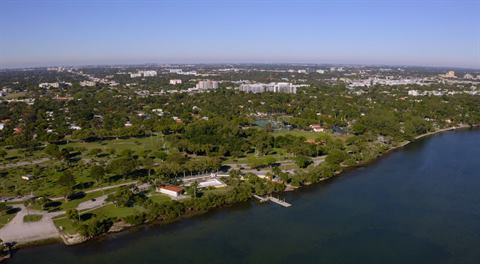 The new partnership includes a grant agreement that provides up to $400,000 for the City and TNC to design the Morningside Park Resilient Shoreline Project. The funding stems from a larger grant  provided directly to TNC by the Chubb Charitable Foundation in an effort to expand the use of green infrastructure to protect Miami’s coast and its communities.

“The City of Miami is proud to announce this project partnership with The Nature Conservancy, made possible by the financial support of the Chubb Charitable Foundation,” said Mayor Suarez. “Our hope is that the Morningside Park Resilient Shoreline Project will both safeguard our waterfront and become a prototype for future green and green-grey infrastructure solutions in Miami. It is clearly a step in the right direction as we work – with the input of our community – to safeguard Miami’s future for our own children and for their children, too.”

Once designed and implemented, the Morningside Park Resilient Shoreline Project will incorporate and leverage natural infrastructure that can provide significant risk-reduction benefits. Healthy mangroves, intertidal zones and coral reefs reduce wave energy, and they have the potential to buffer coastal communities like Miami’s Morningside neighborhood from storm surges and sea level rise. A recent study funded by The Nature Conservancy concluded that mangroves in Florida protected approximately 625,000 people and prevented $1.5 billion in direct flood damages during Hurricane Irma in 2017.