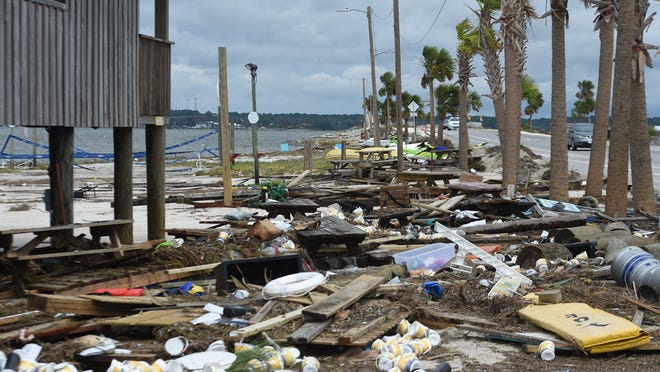 Navarre Beach lost an estimated 100 million cubic yards of sand during Hurricane Sally, and officials are racing to tally the full extent of the damage to secure as much funding as possible to restore the beach.

The sand loss is the worst at the easternmost and westernmost points of the beach, officials said. There, at high tide, there's only about 30 feet of beach in between the mean high water line and the dunes; the sand is gray and hard, and the dunes are clearly eroded.

"There's a lot of damage on the west and east end, but if you walk in the middle of the beach, it looks like it was untouched," said District 4 Santa Rosa County Commissioner Dave Piech, who represents Navarre and Navarre Beach. "One beach walkover is missing 5 feet of sand and then the next beach walkover is fine."

County officials were walking the beach Wednesday to survey damage with Federal Emergency Management Agency personnel and to assess the full extent of the erosion. Early estimates of 100 million cubic yards lost could ebb up or down depending on the final assessments.

For context, during the county's most recent beach restoration project in 2016, engineers dumped 2 million cubic yards of sand on the beach.

"We've yet to quantify an exact amount, but there is significant beach erosion," said county engineer Roger Blaylock. "It happens every storm, especially at the west and and the east end."

The county is hoping to secure funding from FEMA and the federal and state government to rectify the beach erosion and possibly do another restoration project, sooner than the next scheduled restoration in 2026. Piech said a typical beach restoration costs anywhere from $10 to $12 million — but this is not a typical storm.

"The county sets aside funds every 10 years, so we plan for beach restoration on a normal cycle," he said. "This is not a normal cycle."