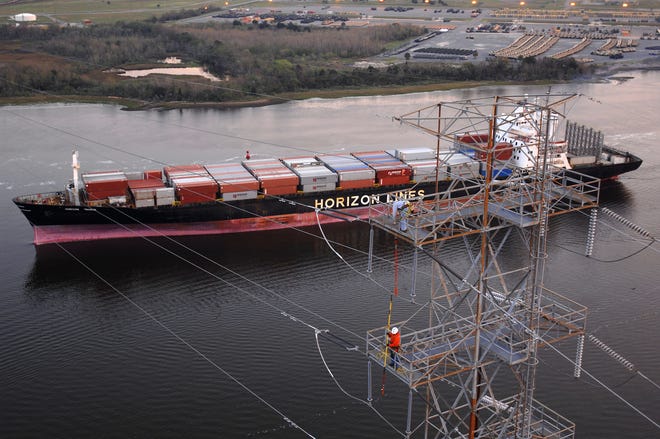 In a major reversal, Jacksonville Port Authority officials said this week a set of high-voltage JEA transmission lines crossing the St. Johns River need to be raised higher, an enormously expensive, complicated and risky project that a past analysis by federal officials found was unnecessary.

The request is a hidden, multi-million dollar cost to the already expensive $484 million project underway dredging the shipping channel from 40 to 47 feet.

The U.S. Army Corps of Engineers, which is leading the dredging project, previously found that even the largest ships expected to use a deeper shipping channel in Jacksonville would have plenty of clearance under JEA's 175-foot transmission lines, a finding Army Corps and JaxPort officials defended throughout a three-year federal court battle with the St. Johns Riverkeeper over the accuracy of the Army Corps' legally required analysis of the project.

The largest "super post-Panamax vessels" that might use the port require a maximum air draft of 156 feet, the Army Corps found, meaning they would operate "well below" the 175-foot clearance.

Now, however, port officials claim the lines must be higher so it can use the "full benefits of a deeper channel." And earlier this year, under a prior regime of JEA executives, the utility apparently agreed to the port's request, even though its own past findings concluded it was unnecessary.

JEA officials recently discovered an un-dated, un-signed white paper that committed the utility to raising the transmission lines, which could cost ratepayers anywhere between $29 million to $96 million.

After the ouster of former CEO Aaron Zahn in January, interim CEO Paul McElroy terminated the remaining executives who served under the controversial chief executive, so figuring out where the non-descript white paper originated internally was a bit of a mystery for the new utility leadership.