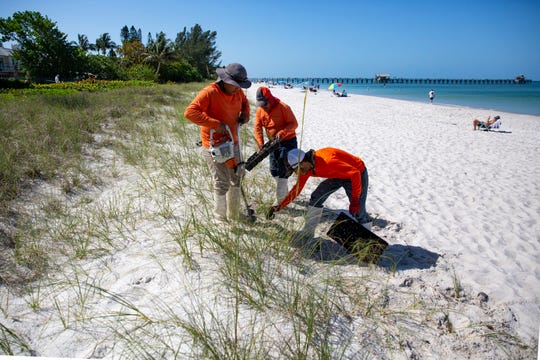 Naples Beach is a destination, but for those who like to stop and smell the flowers, a diverse community of native plantings will flank incoming visitors just north of the city pier.

At the west end of 10th Avenue South, city contractors partnered with the Naples Botanical Garden on Wednesday morning to beautify and fortify the dunes.

Staffers from the garden dug up the remaining invasive beach naupaka that surrounded the wood plank dune walkover while others dug holes to introduce a variety of native plants.

“The invasive plants take over the beach and form a monoculture,” said Chad Washburn, the garden’s vice president of conservation said. “It’s not good for the ecosystem.”

The goal of the dune planting is to create a diverse ecosystem that not only protects the shoreline from erosion during tropical storms, but also creates a visually appealing entrance to the beach.

Just before the dunes, benches look out to the Gulf. There, flowers will help create a visually appealing resting area. While the yellow flowers won't be too functional, they'll help drive what Washburn called the "economic engine" of the area: sandy beaches.