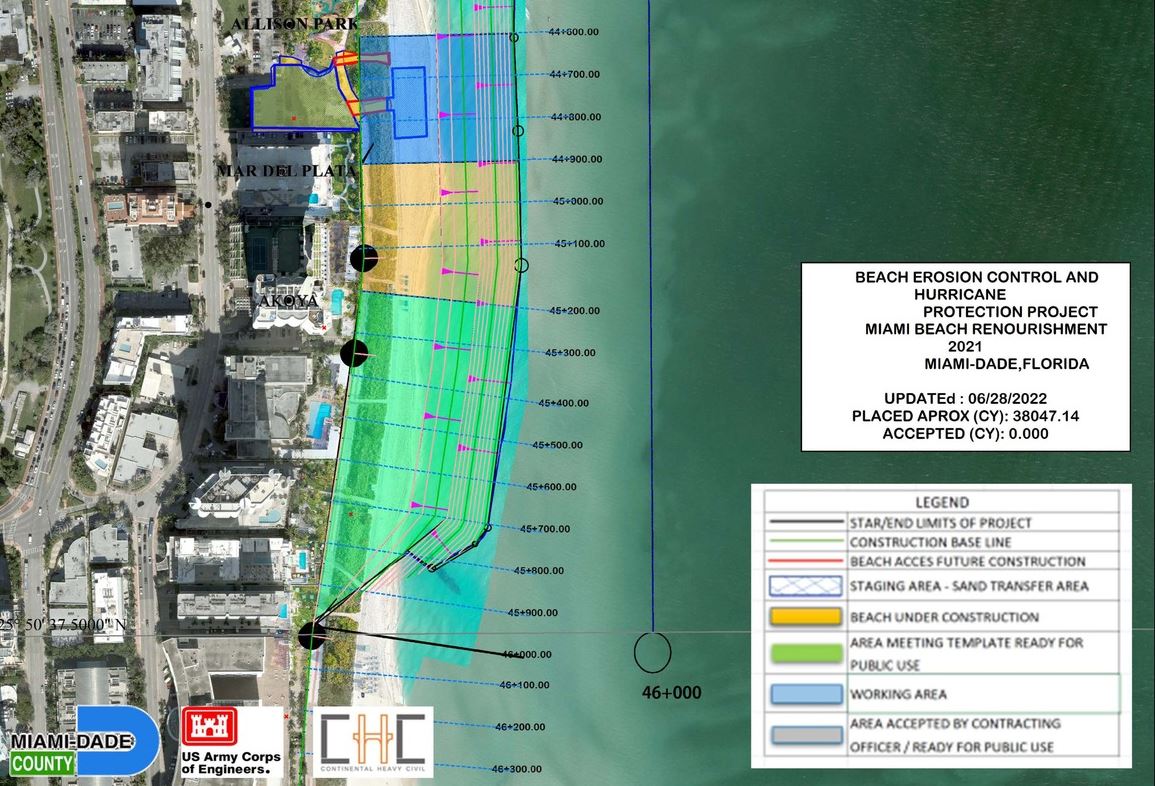 As sand renourishment continues in an 830,000-cubic yard project in Miami Beach, the county has acquired consultation for alternative ways to retain sand along county-managed beaches.

Miami-Dade County’s Division of Environmental Resources Management has hired coastal engineering firm GHD Services Inc. to consider alternative ways to retain sand along county-managed beaches and to reevaluate the performance of such existing structures as breakwaters at Miami Beach’s 29th to 32nd streets and recommend on sand retention there.

The recommendations so far include breakwater structures and groins at different locations, such as Bal Harbour and in Miami Beach, said Marina Blanco-Pape, the county’s Department of Regulatory and Economic Resources water management chief.

“We are in discussions with the state to finalize recommended modifications in the area of 29th Street in Miami Beach,” she said. “There is no target date for implementation yet. The Bal Harbour groins will be implemented by the US Army Corps of Engineers (USACE) under the new re-authorized federal project after 2025.”

In all, sand is being spread over 10.5 miles of beach in Sunny Isles, Bal Harbour and Miami Beach. The Army Corps of Engineers delivered 830,000 cubic yards of sand for the spread, a $40.5 million project.

Continental Heavy Civil Construction was hired for the work, which began with the hot spot on 63rd Street. Sand was to be spread beginning in the south section of the segment and work north.

Renourishment was initiated Feb. 10 at Allison Park, which housed generators, office trailers, roll-off containers and other equipment. The sand brought to the beaches follows strict qualifications, between 0.062 and 4.76 millimeters, similar in color and grain size to what was on the beach already. Sand distribution is based on the hurricane season and natural erosion.

With the ongoing Miami Beach USACE contract, there will be a significant improvement to the construction berm and increased dune protection, Ms. Blanco-Pape told Miami Today. The county will continue to closely monitor the shoreline changes with surveys and field inspections to be able to correct erosional trends before they cause significant impact.

“In addition, the USACE just completed and approved the re-authorization of the federally authorized project for another 50 years, starting in 2025,” she said.

Miami-Dade County faces many conflicting needs with the continued erosion protection of its shoreline, protection from flooding and surge effects on the bay and the Everglades restoration, Ms. Blanco-Pape explained, “all needs made more critical with the increase in sea level rise forecasted to impact our residents, properties and businesses in the years to come.”

“This makes our long-standing partnership with the USACE that much more important,” she said. “With the re-authorization of the current federal project, Miami-Dade County will be able to provide adequate erosion protection to our shoreline and maintain the now very successful federal project, especially under a future scenario with sea level rise.”