Southeast
The beach north of the Flagler Beach pier has been carved out, without so much as a major storm. (© FlaglerLive) 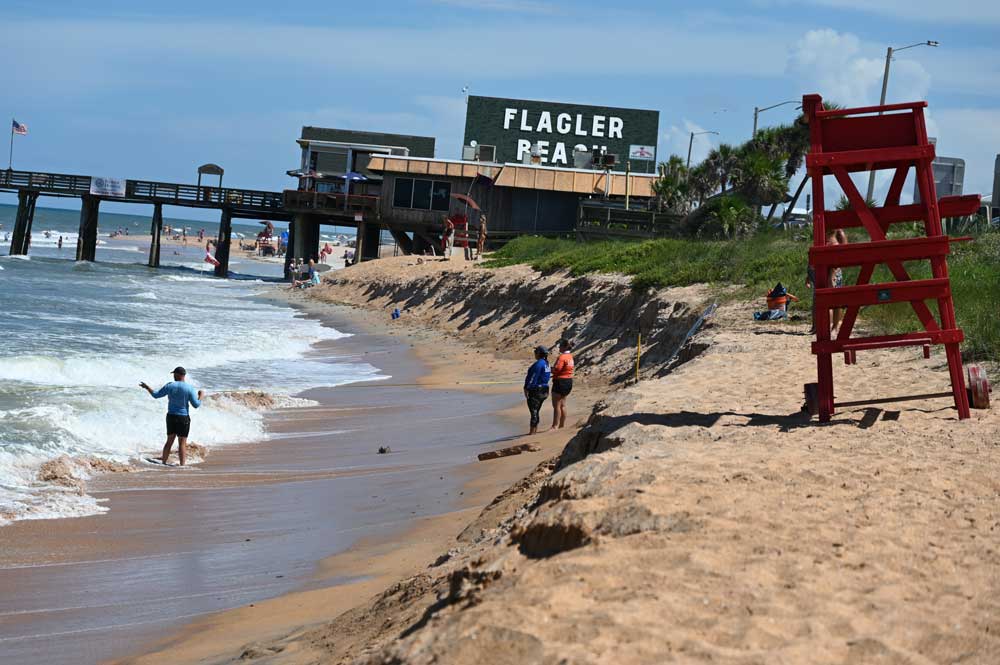 Where has the beach gone north of the Flagler Beach pier?

It was a familiar sight six years ago when Hurricane Matthew’s surge sheared off colossal segments of sand from Flagler’s shore. But there’s been no storms to do this to the beach from the Flagler Beach pier north, for several blocks. There’s been no tropical storm, no Nor’easter, no severe storms. Just tides. Now the beach is all but gone, leaving nothing between waves and cliffs at high tide.

Waves lap at sheer cliffs that drop off from what’s left of a stretch of sand along the boardwalk. That’s still there, covered in vegetation. But then it’s just a drop of 6 to 8 feet below, making it difficult or impossible for beachgoers to lounge by the surf, and making it difficult for them to get to the sands at low tides, because of the cliffs.

It’s a similar scene at around 13th and 14th Street South. “There is no beach for a whole entire block from half of 13th south to half of 14th south. The water is all the way up to the rocks. There is no beach to be had,” Flagler Beach mayor Suzie Johnston said. “I have seen these cliffs created in the past but they were never as far up the dune as they are right now. And that’s what has me worried, is we’re to a point where the erosion is a six-foot drop or more, and it’s almost to where the vegetation is, and every wave that hits the beach is taking more and more sand away. And this is without a storm without super high tides.”

The Flagler Beach City Commission has called an emergency meeting for Wednesday at 9 a.m. to discuss the situation. The development is adding urgency to beach-renourishment projects slated for next year for both sides of the pier. But those aren’t beginning until next June, with three months left in hurricane season. One of those projects is the Army Corps of Engineers’ dune-rebuildiong of 2.6 miles from South 6th to South 28th Street. The other is a county-led project from South 6th up to about North 20th, and from South 28th to the Volusia County line.

Al Hadeed, the county attorney who continues to steer both projects through their successions of Scylla and Charybdis–and a behind-the-scenes architect of numerous environmental protection initiatives that bear the county’s stamp–was on the beach for four hours today, surveying the erosion. The county’s engineering department is involved, and on Tuesday, the county will take drone footage of the erosion.